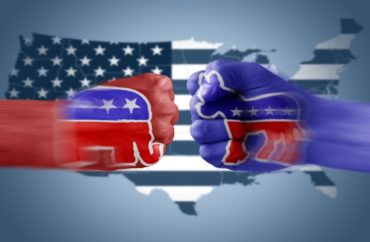 It’s one thing not to like members of the opposite political party, but it’s quite another to think they’re malicious and diabolical. And yet a recent survey of college students found that nearly 40 percent of each political party thinks of the other as “basically evil.”

The recent College Fix online survey asked 1,000 college students whether members of the opposite political party “are not just worse for politics — they are basically evil.”

These results closely mirror the findings of a set of national polls of Americans taken in recent years that asked an almost identical question. Those results found that roughly 42 percent of each party viewed the opposition as “downright evil.”

The student poll was conducted exclusively for The College Fix by College Pulse, an online survey and analytics company focused on college students.

The scholars behind the national snapshots are political communication Professor Nathan Kalmoe of Louisiana State University and Associate Professor of Government and Politics Lilliana Mason at the University of Maryland, College Park.

The duo had asked the “evil” question and many others designed to test the levels and limits of the political polarization America faces and summed up their findings in a report titled “Lethal Mass Partisanship.”

They had also questioned members of both political parties on whether it is justified to use violence to advance their political goals. “Nine percent of Republicans and Democrats say that, in general, violence is at least occasionally acceptable,” the scholars reported.

Similarly, the College Fix poll asked the same question of 1,000 college students — if it is justified to use violence in advancing political goals — and got nearly the same results.

If that rate held true on a larger scale, that would mean for every 1,000,000 Democratic college students, 70,000 think violence is justified.

That extrapolation is similar to one made by political analyst Thomas Edsall in his 2019 New York Times piece regarding Kalmoe’s and Mason’s national findings on the “downright evil” question.

“Just over 42 percent of the people in each party view the opposition as ‘downright evil.’ In real numbers, this suggests that 48.8 million voters out of the 136.7 million who cast ballots in 2016 believe that members of opposition party are in league with the devil,” he wrote.

For The College Fix poll, extrapolated results would mean that for every 1,000,000 students who identify as Republican or Democrat, roughly four-tenths — or 400,000 — think of the other as “basically evil.”

In their “Lethal Mass Partisanship” report, Kalmoe and Mason listed other questions they had asked in their two national surveys, which included:

If [Opposing party] are going to behave badly, they should be treated like animals?

If you heard a politician had been murdered, would your feelings about that depend on whether they were a Republican or a Democrat?

When, if ever, is it OK for an ordinary [Own party] in the public to harass an ordinary [Opposing party] on the Internet, in a way that makes the target feel unsafe?

In weighing in on their findings, the professors put them in context.

“Unfortunately, given the novelty of these questions, the levels of partisan hostility we observed from American partisans in 2017 and 2018 cannot be compared to levels experienced years, decades, or centuries ago. Certainly, the 2016 presidential election was acrimonious and intense, norm-defying and extraordinarily hostile. The partisan hostility we find here may therefore reflect a new trend. However, partisan acrimony certainly did not begin in 2016,” they wrote.

“Ultimately,” they concluded, “these results find a minority of partisans view violence as acceptable acts against their political opponents. Many times more embrace partisan moral disengagement, which makes the turn to violence easier if they have not made it already. As more Americans embrace strong partisanship, the prevalence of lethal partisanship is likely to grow.”

In the comments section of The College Fix survey, students have the option to weigh in on the poll questions. Here are some of the Democratic students’ responses to the question of evil:

Wright State: The Republican party, yes. Republicans in general, no. Same with the Dems.

Missouri State: Republicans are not evil, but the ideas the party stands for are relatively close to evil.

FHSU: Republicans aren’t bad, the RNC is. (So is DNC). “Establishment” politicians only lookout for them and their rich friends. Then they turn civilians against each other in a mini GOP vs DEM proxy war to distract us from the rich assholes.

Clemson: Read “1984.” Republicans are leading us to a society where “The party tells you to reject the evidence of your eyes and ears. It is their final, most essential command.”

Here are some of the Republican students’ responses to the question of evil:

Penn State: I would say their party has gone down the shitter, but they aren’t evil.

Ohio State: I don’t “choose” to believe that they’re evil. It just so happens that I intrinsically believe that aggressing against people who have done nothing to you is evil, which means I find all statists and authoritarians evil.

Colorado School of Mines: I wouldn’t say Democrats are evil, but a lot of the dems such as the Clinton’s, Biden’s, etc are evil.

Drexel: I wouldn’t say the party as a whole is evil, but the party overall has been infiltrated by sinners, far more so than the Republicans.

Arizona State: Both parties are evil in their own special ways.

Here are some of the Democratic students’ responses to the question of violence:

CWRU: I don’t think it should be justified for anyone to use violence to advance their political goals.

UMass Amherst: If we continue to suppress any left wing sentiment, no matter how minor, the pressure will eventually be too much. I dont think soon, but eventually.

The University of Montana: No one should use violence!

University of Houston: We wouldn’t have any of the worker protections or civil rights we have right now if not for violent (and nonviolent) movements.

Clemson: Not justified for any party. Trump has encouraged his supporters to engage in violence. This is unacceptable.

Here are some of the Republican students’ responses to the question of violence:

WashU: Love how people think Dems can be violent but Reps have to just sit there and be best.

UMass Amherst: I put “strongly disagree” just like you probably…but of any kind is unacceptable? So you would have been opposed to the American revolution?

Oklahoma City Community College: What Republican has been using violence to achieve their ends? Genuinely curious, since all I’ve only heard is the Leftist using violence – going as far as trying to run over kids who had Trump flags on their bikes.