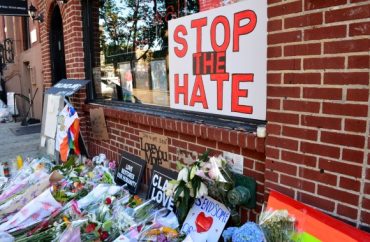 When Cal State San Marcos President Karen Haynes sent a memo to the campus community on Monday to offer condolences on the Orlando massacre in which 50 people in a gay nightclub were slaughtered by gunman Omar Mateen — who had pledged allegiance to the Islamic State — she managed to avoid the word “terror” and “terrorism” in her 258-word memo.

Words such as “horrific” and “tragic” were used, extra LGBTQ counseling was offered, a “Community Reflection” is in the works. And, of course, the obligatory denunciation of “hate.”

“[W]e also stand in solidarity against the hate and violence that now seems all too common in our nation and world. At CSUSM we are a diverse group – diverse in culture, religious belief, political perspective, gender and sexual orientation, nationality, talents and abilities,” she added. “… Now more than ever, we must continue to come together as one community to counteract the hate and divisiveness of our times.”

The fact that the Orlando mass shooting has been billed as the largest terrorist attack on U.S. soil since 9/11 didn’t seem worth mentioning, apparently. But Haynes is not alone.

A 266-word email from UC Merced Chancellor Dorothy Leland sent Monday to the campus community was also devoid of the word “terror” or “terrorism.” Again, the preferred term is “hate.”

“This deliberate act of hate against the LGBTQ+ community was horrific and also an affront on our deepest-held values as an inclusive society,” stated Leland in her email, who also threw in the generic expression “incidents of violence” for good measure.

Campus leaders are not the only ones to tiptoe around the word terrorism, instead using the catch-all term “hate.”

At a Cal State Fullerton memorial for Orlando victims on Monday, in what was billed as an “art therapy chalk project” by the Orange County Register, students got in on the denounce-hate action as well: “More love. Less hate.” “Seek understanding. Stop the violence. Spread love. We are all Orlando.” “We are all human beings. Respect each other and the world we share.”

At UC Berkeley, to the credit of its campus newspaper The Daily Californian, it at least reported “multiple sources have classified the shooting as a hate-motivated act of terrorism.” In contrast, the university’s Chancellor Nicholas Dirks’ 161-word statement to the campus community not only avoided the word “terrorism,” but seemingly appeared to blame “intolerance” and a lack of gun control for the shooting.

“Now, more than ever, we must come together to fight the forces of intolerance, strengthen the foundations of our democracy, and do what we can to eliminate the unlawful use of firearms,” Dirks stated.

At Duke University, which had once planned to amplify the Muslim call to prayer every Friday from its iconic cathedral, an 820-word article from its campus newspaper the Duke Chronicle quoted students talking about “hate” motivating the attack, as well as “homophobia” and “transphobia.” One Duke student even likened the mass shooting to the “violence” against the LGBTQ on campus, “pointing to the removal of pride flags on campus and homophobic slurs.” The word “terrorism” did not appear in the article.

A few professors interviewed on the subject were also quick to avoid any talk that the Orlando massacre was a terrorist attack.

UC Santa Barbara sociology and global studies Professor Mark Juergensmeyer told a local news station he didn’t look at the attack as being an official act of terror coordinated by ISIS, but rather “a young man with personal problems a particular kind of homophobia mixed in with extremist rhetoric.”

And University of Alabama criminal justice professor Adam Lankford also downplayed the massacre as terror-motivated and told the Toronto Star it was likely more of a mental health issue.