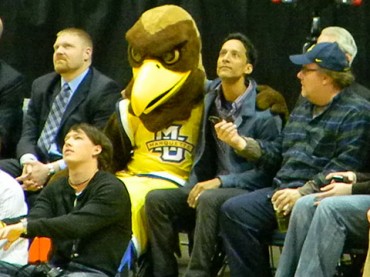 McAdams ‘should have known’ his whistleblowing would lead to ‘threatening communications’

It has been a rough three months for Marquette University professor and acerbic blogger John McAdams.

Because McAdams criticized a graduate teaching instructor for silencing an undergraduate owing to his traditional views on marriage, the school informed him last week his tenure is being revoked and he’ll be fired.

Though academic observers debated whether McAdams should have named and shamed now-former Marquette grad student Cheryl Abbate – which led to his temporary banishment from campus and canceled classes – even McAdams’ critics are warning the university it’s setting a terrible precedent.

“Tenure and academic freedom carry not only great privileges but also vital responsibilities and obligations,” Richard Holz, dean of the College of Arts and Sciences, told McAdams in the Jan. 30 letter announcing his pending termination.

Holz blames McAdams for some hateful email that Abbate received in response to her treatment of a conservative student, saying McAdams put her her personal safety at risk.

“Based upon your years of Internet postings, you knew or should have known that your Internet story would result in vulgar, vile, and threatening communications to Ms. Abbate,” Holz wrote. McAdams disputes that claim. “I’ve been blogging for 10 years,” he told The College Fix Thursday. He said he was “unaware” of other people receiving hateful email because of his prior writing.

Most people would probably just dismiss such virulent email writers as “idiots” and ignore them, McAdams said.

Another grievance of Holz is that McAdams did not speak to Abbate nor ask permission to use her name, giving her only a few hours to respond before his initial blog post.

When The Fix emailed Abbate for comment in November following McAdams’ blog post, however, a university spokesperson responded on her behalf in less than 90 minutes.

McAdams told The Fix that he first emailed Abbate on a Sunday morning and did not post the blog post until that evening. Asked if she ever contacted him for a clarification or correction, McAdams said “never.”

‘Nothing to do with academic freedom’

Marquette President Michael Lovell told the campus community on Facebook Wednesday that the school’s actions toward McAdams “have everything to do with our Guiding Values and expectations of conduct toward each other and nothing to do with academic freedom, freedom of speech, or same-sex marriage.” Though Lovell says he shows “full support for academic freedom,” he tempers that support further down: “We must always remember that academic freedom must be grounded in integrity, be accurate at all times and show respect for others’ opinions.”

Holz shows similar ambiguity toward academic freedom. “While you claim to simply be ensuring the exercise of academic freedom, your irresponsible conduct has the opposite effect,” he told McAdams in the letter.

Citing the American Association of University Professors (AAUP) statement on academic freedom, Holz accuses McAdams of violating it and creating “fear in your colleagues and students” that what they do and say could end up on his blog.

Even before Holz’s email, however, the AAUP had already sided with McAdams, as The Fix has reported.

In a letter in late January, the group disputed Marquette’s claims that McAdams’ teaching would be harmful to others, and argued against an indefinite suspension.

On the group’s Academe blog, author John Wilson – who has written books against Rush Limbaugh and Newt Gingrich – called Holz’s comments a “distortion” of AAUP’s positions on academic freedom.

“Marquette is perfectly free to condemn McAdams for an alleged breach of civility but not to punish him,” Wilson wrote: Even if some faculty “fear being criticized by McAdams … no one has a right to be free from criticism,” including graduate instructor Abbate.

School spokesman Brian Dorrington declined to answer questions regarding AAUP’s criticism of the administration or any other issue involving McAdams, referring The Fix to Lovell’s Facebook response as the university’s only comment.

‘Tenure at Marquette is worthless’ under school’s implied rules

The Foundation for Individual Rights in Education (FIRE) blasted Marquette’s move to fire McAdams in a lengthy statement Thursday.

“If Marquette can fire a tenured professor for criticizing a fellow teacher on a blog, then tenure at Marquette is worthless, as are freedom of speech and academic freedom,” FIRE Executive Director Robert Shibley said.

“It’s madness to claim that Marquette’s case against McAdams has ‘nothing to do’ with his academic freedom and free speech rights,” as President Lovell claimed, said Peter Bonilla, director of FIRE’s Individual Rights Defense Program. “Freedom in the academy is simply nonexistent” if administrators can judge when professors are “less civil” than they would like, he said.

McAdams told The Fix there is a chance for an appeal within the university or through the courts. While he noted Marquette as a private school is not obligated to follow the First Amendment, the school does have “contractual obligations” to follow.

Updating the situation on his blog Thursday, McAdams said he will “indeed fight this … and most certainly will not go quietly.” He’s retaining the Wisconsin Institute for Law & Liberty, a public-interest law firm.

Grown-ups should act grown up

Lovell’s statement on Facebook drew polarizing responses in the comments.

Former grad instructor Abbate “is a grown woman, not a child,” wrote Betsy Bogdovitz, a Marquette alum in Dallas. “If Marquette is going to put her in charge of a University class, it is incredibly disingenuous to portray her as some helpless ‘student.’”

“If McAdams is terminated, it will be a huge loss to the University,” wrote Sara Bell Tibbetts. “He’s a fantastic professor and I was lucky to have taken a few of his classes 15 years ago.”

“Marquette has just lost all future donations from me as an alum and my children definitely won’t be attending,” wrote Meghan Manor, saying grad students like Abbate “need to know how to stand up for themselves … without having their hand held.”

The administration’s defense of Abbate “makes me proud to attend this institute and to be a Catholic,” wrote Erica Henderson, a graduate assistant at Marquette. “Don’t dress up your hatred and ignorance as faith, it makes the rest of us look bad.”

“He is being disciplined because he recklessly, libelously, and obnoxiously used students and colleagues at Marquette in order to advance his agenda,” Justin Weinberg, a philosophy professor at the University of South Carolina who runs the blog, responded to a commenter who called the move against McAdams “an absolutely chilling attack on academic freedom.”