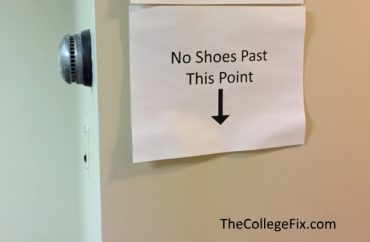 There’s prayer rugs, a Koran, a sign telling visitors to take their shoes off.

What is designated as prayer and meditation spaces for all students of all faiths at the University of Iowa looks more like some sort of makeshift mosque.

The two rooms were set aside after students of the Muslim faith requested it. The students were reportedly having a hard time finding a place to pray five times a day.

“The IMU policy provides space for registered student organizations, regardless of the mission of the organization, be it academic, programming, service, political, or religious,” Anne Bassett, a spokeswoman for the university, said in an email to The College Fix on Wednesday. “The new temporary space for prayer and meditation in the Iowa Memorial Union was requested by students of the Muslim faith, but is open to all students,” she said.

But the two rooms have drawn criticisms from the Freedom From Religion Foundation, which has asked the university to close them, according to a March 28 memo from the group. The foundation printed a picture with one of the rooms labeled “brothers” and with a sign telling students to take their shoes off.

Likewise, in mosques, women and men are separated for prayer and worshipers take their shoes off.

“When a government entity like the University of Iowa creates prayer areas for specific religions and imposes religious rules upon students (removing shoes, segregating men and women), it has unconstitutionally entangled itself with religion,” the memo stated. “The university finds itself in a position where it must either sponsor and endorse the tenets of a religion by allowing it to impose religious rules, or dictate to religious students which tenets they are allowed to follow on university property.”

Earlier this week, a University of Iowa student went by the rooms at the request of The College Fix. The student noted a gender sign was no longer there, but a sign taped to one of the doors stated “No shoes past this point.” The student also observed prayer rugs, a Koran, and a sheet listing contact information for the Muslim Student Association. In response to the Freedom From Religion Foundation’s concerns, Tom Rocklin, vice president for student life, wrote back to “correct some widely circulated misinformation about the recently opened prayer and meditation spaces in the Iowa Memorial Union,” according to the response, a copy of which was provided to The College Fix.

“These two rooms are available 24 hours a day and 7 days a week to any one who want to use them. There are no religious symbols in the rooms and they are simply labeled ‘Prayer & Meditation.’ There is no furniture in the rooms and the walls are bare,” Rocklin stated.

“People of any gender are welcome to use either room. Members of the Muslim Students Association have an informal arrangement among themselves that men who are members of the association will use one room and women the other, but they fully understand that anyone of any gender might enter either room at any time,” he continued. “The rooms have been used by people of several religions and of no religion since they have been opened.”

Asked by The College Fix on Wednesday how many Christian students have used the rooms, Bassett stated “we do not ask students their religious affiliation upon entering.”

The Freedom From Religion Foundation is not the only one asking about the rooms. Some Iowa Board of Regents delved into the development at their meeting last week.

UI President Bruce Harreld defended the rooms, saying “It’s the right thing to do; We don’t want to be a community of exclusion. We want to be a community of inclusion,” the Press-Citizen reports. When asked by Regent Subhash Sahai how many non-Muslims have used the rooms, Harreld said he didn’t know – but “at least one Christian has prayed there: me.”