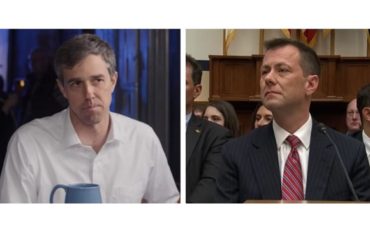 Former FBI agent Peter Strzok, who was fired in August 2018 after text messages revealed he said the agency would “stop” the election of Donald Trump, and Texas politician Beto O’Rourke, who failed to be elected to the U.S. Senate as well as earn the Democratic nomination for president, have found new jobs.

Georgetown University has reportedly hired Strzok as an adjunct professor in its Walsh School of Foreign Service. O’Rourke is slated to teach a class on Texas politics at Texas State University this upcoming spring semester.

Both men are not shy about their aversion to Trump.

Strzok has been identified as one of the “deep state” ringleaders who worked to discredit President Trump by opening the Crossfire Hurricane investigation into alleged Russian collusion that has now been thoroughly debunked as an attempted political stunt.

O’Rourke, meanwhile, has been a staunch critic of Trump, with his vocal condemnations of the president and GOP policy continuing unabated despite dropping out of the race.

It perhaps should come as no surprise that academia would embrace these two men and their political biases; indeed they will fit right in with the progressive leftism that is fully entrenched in higher education.

But that doesn’t mean the hires should be applauded.

“[T]hese hires demonstrate that higher education—even at public institutions funded by taxpayers—have become fiefdoms of the left, just like progressive think tanks. Accordingly, they operate as hostels for itinerant hacks between gigs, unemployed politicians, and discredited activists writing (or promoting) a self-serving book,” said attorney and higher education watchdog Mark Pulliam in an email Wednesday to The College Fix.

“Lack of credentials, scholarly accomplishments, or neutral point of view is deemed irrelevant. What matters is offering a helping hand to a fellow comrade in ‘the movement,’ who would benefit from the ‘prestige-by-association’ and stipend,” Pulliam said, adding: “This is not what colleges and universities are for.”

David Randall, director of research for the National Association of Scholars, said that “higher education is generally inefficient, not least because it uses radical, politicized professors as intermediaries for partisan propaganda.”

“Texas State University demonstrates remarkable efficiency by getting rid of the middleman, and simply hiring radical politicians to provide the propaganda directly,” Randall told The College Fix via email Wednesday.

Echoing his colleagues’ sentiments, Jay Schalin, director of policy analysis for the Martin Center for Academic Renewal, agreed that the hiring of O’Rourke and Strzok illustrates once again that academia is the left’s natural sanctuary.

What’s more, it’s “where failed Democrat politicians and assorted other scoundrels on the left often run after being disgraced, having lost their mojo, or want a steady gig with the ability to influence future generations,” he said via email to The Fix on Wednesday.

“It does not matter if they lack the depth or credentials to teach, are proven dishonorable, or are activists rather than scholars, academia will welcome them with open arms. Beto O’Rourke and Peter Strzok should feel at home on the modern ‘woke’ campus.”

He added it is a “disgrace that any college will hire Strzok to impart wisdom.”

“His lack of honor and concern for the truth are known before he is hired; what can he offer but more of the same? The fact that any school could consider him for a teaching positions shows that academia, too, is no longer concerned with morality and truth,” Schalin said.

If there is any consolation, at least students should know exactly what to expect in these classes if they enroll, said Cornell University law Professor William Jacobson.

“I don’t have a big issue with them being hired, though there should be no pretense that the courses are [politically] neutral or truly academic,” he said via email. “In some ways, students knowing up front the biases of the instructor is beneficial, as opposed to so many faculty who purport to be non-biased but actually are biased both in terms of syllabus and classroom conduct.”