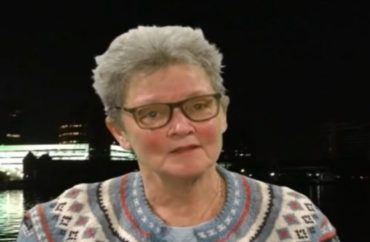 ‘[N]o matter how many testosterone-suppressing drugs he takes, he will always be a biological male.’

USA Swimming veteran official Cynthia Millen resigned after more than 30 years at the organization to protest the inclusion of “biological male” swimmers who compete against females.

Lia Thomas, the University of Pennsylvania transgender swimmer who is smashing women’s records after competing for two full seasons as a man, is “a biological male who is competing against women,” Millen said. Thomas took testosterone suppressants and has been cleared by the NCAA to compete against women.

Millen said that dividing swimmers by sex as well as age group is a well-established practice that begins when competitiors are chldren:

“USA Swimming recognizes that boys swim differently from girls, and this is accentuated when boys and girls go through puberty,” Millen said.

“[N]o matter how many testosterone-suppressing drugs he takes, he will always be a biological male,” Millen said, in reference to Thomas.

“He’s going to be destroying women’s swimming,” she said.

Since resigning from her position, Millen says that she has been encouraged by support from swimmers’ parents and professionals.

“I’m getting great letters from dads of daughters, and moms of daughters, but we’re also seeing some past Olympians stepping up and saying no, this is wrong,” the former swimming official said.

MORE: UPenn swimmers demoralized: ‘No matter how much work they put in, they’re going to lose’

About the Author
Margaret Kelly
Margaret has previously worked as an associate editor of Columbia magazine, an editorial assistant at DNAinfo.com, and an elementary school teacher at a charter school in Phoenix. She holds a B.A. from New York University and resides in New Haven, Connecticut.