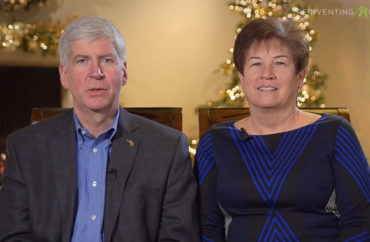 Coached final memories are more, not less, vulnerable to manipulation

It just made available its fourth round of grants through the Campus Sexual Assault Grant Program, created at the behest of First Lady Sue Snyder (right, with Gov. Rick Snyder) after her 2015 “Inform. Empower. Prevent. Let’s End Campus Sexual Assault” summit, WJMN reports.

Snyder met with Education Secretary Betsy DeVos* last year to convince her that “Michigan can be a model for other states” on fighting campus sexual assault.

Both public and private Michigan colleges can apply for money “to help support ongoing efforts to reduce sexual assaults on campuses across Michigan.” They can submit up to two applications each for one-year projects that must end by Nov. 30, 2019.

A committee that includes representatives from the Michigan Domestic and Sexual Violence Prevention and Treatment Board, state police and governor’s office will evaluate applications.

“Applicants are encouraged to research and develop their projects with state and national sexual assault experts, as well as model their proposals after evidence-based sexual assault programs,” according to WJMN.

Memory and neuroscience experts told Yoffe in her three-part Atlantic series on campus rape proceedings that there’s no scientific basis for claims in trauma-informed investigations.

These include the widespread belief that the final, coached version of reconstructured memories after traumatic events are more accurate than the initial, fragmentary version. In fact, they are more vulnerable to manipulation by authority figures such as Title IX officials and sexual-assault response staff.

Harvard psychologist Richard McNally even said that it’s “psychiatric folklore” to claim that the mind “protects itself by repressing or dissociating memories of trauma.” This is how sexual-assault activists and Title IX officials justify their interpretation of contradictory claims and hazy memories as evidence of sexual assault.

Support for unscientific theories in campus sexual-assault response is bipartisan.

The Democrat-led Massachusetts Senate approved legislation to impose this junk science in campus rape training last year, and high-ranking Republican John Cornyn introduced a bill in the U.S. Senate just before Christmas that would create a “demonstration program on trauma-informed training for law enforcement.”