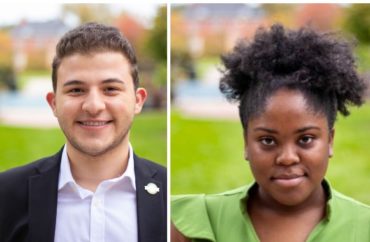 Police ‘quickly determined it was not criminal in nature’

Here’s a weird one: College students tried to get police to punish someone, and the cops refused.

Michigan State University’s student government was so offended by anonymous comments in an online question-and-answer session with President Samuel Stanley that it asked police to identify the users by IP address.

The Associated Students of MSU wrote in a Facebook post that it should have halted the Q&A as soon as it saw the “numerous racist and hateful comments” submitted through the platform, Slido. It takes “full accountability for not fully protecting black students.”

ASMSU said it contacted campus police and asked Slido to identify the commenters after the event was over. The statement was signed by President Mario Kakos and Miracle Chatman, chief diversity, equity and inclusion officer (left and right, above).

It’s far from clear black students needed protection from the comments, which do not remotely rise to a criminal level. It’s highly unlikely Michigan State could even investigate the purported students behind the comments under its own disciplinary code, seeing as the speech is (sort of?) rude but not a true threat.

Campus newspaper The State News reprinted some of the comments, which are about the mildest “racist” comments I’ve ever seen.

One user jeers black students for asking “dumb” and “unproductive” questions rather than studying, which risks the “black re[te]ntion rate.” Another could have been made by a black pessimist such as writer Ta-Nehisi Coates: “black people only a small portion of the [campus] population. You all can leave and no one will notice.”

MORE: ASMSU votes to ban cafeteria trays … to save the environment

A third implies that police officers replaced “nooses” as tools of black suppression. There’s no explanation given for why this is even an example of racism toward black students.

The State News story on the controversy was not well written, to say the least. It paraphrased ASMSU President Mario Kakos as saying that police were “trying to obtain” IP addresses for the commenters behind the racially tinged comments.

This provoked the Foundation for Individual Rights in Education to write to Chief Kelly Roudebush asking not to identify anonymous users because of their protected expression.

Roudebush wrote back that the “quote you referenced regarding the MSUPD seeking to obtain IP addresses was incorrect,” and Kakos “does not represent our office”:

We were called to respond to this incident by participants. Upon reviewing the information posted during the event, we quickly determined it was not criminal in nature for all the reasons outlined in your letter. We have not sought to obtain IP addresses for participants and will not be doing so. The MSU Police Department is not investigating this incident, beyond the initial review done which determined it was not a criminal incident.

Neither ASMSU nor Kakos, its president, has said on their respective social media whether Kakos was misquoted or misunderstood in the newspaper report. The ASMSU Facebook statement simply says the student government asked police to investigate.

Whatever the case, it’s nice to see that these campus police have more restraint than the intolerant student mobs who seek to slap criminal records on anyone who offends their fragile little minds.