A Tacoma, Washington middle school teacher took great offense when one of his students named President Trump as a person he admires.

The thing is, Perry G. Keithley Middle School sixth grade teacher Brendan Stanton (below) asked his virtual class this very question — “who is the one person you admire and why?”

According to MyNorthwest.com, the male student answered

I admire Donald J. Trump because he is making America great again. And because he is the best president the United States of America could ever, ever have. And he built the wall so terrorists couldn’t come into in the U. S. Trump is the best person in the world. And that’s why I had admire him.

The boy’s mother, Elsy Kusander, entered the room to hear Stanton “berating the president” so she began recording what was being said on her phone.

Stanton was so angry, apparently, he would not even say Trump’s name. 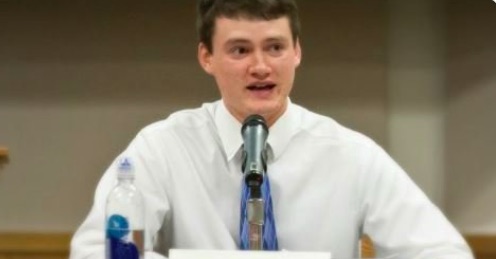 “The example that was shared in the chat, which I went ahead and erased for us, was not appropriate right?” Stanton told his class. “Especially as that individual has created so much division and hatred between people and specifically spoken hatred to many different individuals, ok?

“Again, that individual has spoken hate to many individuals and I don’t think is an appropriate example for a role model that we should be admiring.”

When Kusander contacted Stanton to discuss the matter, she didn’t immediately make him aware she had made a recording. Stanton claimed using President Trump wasn’t an appropriate answer because the question before the class was about “a computer programmer they admired” (Stanton teaches technology education). Students could name “someone from the community” if they couldn’t think of a programmer.

Although Keithley Middle School online classes typically “are recorded and posted to the online portal for students and their parents,” Stanton claimed he deleted the “admired person” question due to student privacy concerns. He also pointed out Kusander’s son’s answer offended another student in the class, not him.

“I do try to keep politics out of the classroom… because students have different opinions, right?” Stanton told Kusander.

Kusander then revealed she had witnessed what transpired:

Stanton’s story then started to change.

“I came into the room, and you were talking, I got my phone and I recorded part of your conversation,” she revealed before doubling down. “I clearly saw and recorded what you were saying…”

Suddenly, the apolitical Stanton who would never bring his political opinion into the classroom, was a little more honest about what transpired.

“I do apologize if my words were not perfect at the time,” he told her. “If I used… if I said that Trump was ‘hateful and divisive,’ that may have been what I used at the time, but my purpose was in bringing us back to the conversation of computer scientists and the positive role that they’ve played in our history.”

He again offered to apologize to her son.

“I totally respect him as an individual. And his opinion. I am always interested in student feedback and also parent feedback as well. So I appreciate you having this conversation with me,” Stanton said.