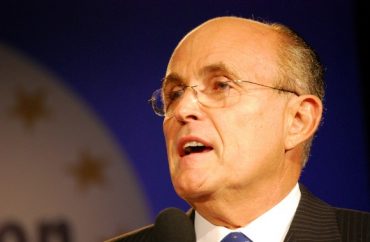 Several hours after the editorial board demanded the rescission of the degree, comparing Giuliani to convicted rapist Bill Cosby, Middlebury President Laurie Patton said the college would formally explore that option.

In a Facebook post Sunday afternoon, Patton cited “the role” that Giuliani played “in fomenting the violent uprising against our nation’s Capitol building” on Wednesday, which delayed the election certification process and ended with deaths of a Capitol Police officer and a protester. She called this an “insurrection against democracy itself.”

Giuliani served as an attorney for President Trump’s legal challenges to the election results, but Patton did not specify what words or conduct by Giuliani led Middlebury to consider rescinding his degree.

The campus newspaper used similar wording against Giuliani, saying his “actions directly endangered lives while instigating insurrection,” citing his infamous suggestion at a Wednesday rally to decide the disputed election via “trial by combat.”

The transcript of Giuliani’s speech about election fraud shows that the “trial by combat” line was the only part where he mentioned anything close to physical aggression:

Over the next 10 days, we get to see the [ballot] machines that are crooked, the ballots that are fraudulent, and if we’re wrong, we will be made fools of. But if we’re right, a lot of them will go to jail. Let’s have trial by combat. I’m willing to stake my reputation, the President is willing to stake his reputation, on the fact that we’re going to find criminality there.

Video shows the audience cheering and laughing at the “trial by combat” line, suggesting they knew it was a metaphor. Giuliani was joined on stage by John Eastman, former dean of the Chapman University law school, who gave a brief explanation of evidence of election fraud.

The Middlebury Campus also cited Giuliani’s behavior before Wednesday. “Giuliani spent months peddling false claims of voter fraud in an effort to subvert the results of a free and fair democratic election,” the editors wrote:

Giuliani has been unwavering in his propagation of this rhetoric, standing alongside the president to put America’s people and values alike in jeopardy. Even when the tangible dangers of this rhetoric became apparent on Jan. 6, as the mob breached the barricades to the Capitol, Giuliani tweeted, “To all those patriots challenging the fraudulent election…You are on the right side of the law and history.”

Patton must rescind the degree, they said, given her statement Thursday that President Trump “incited” “domestic terrorists” to attack the Capitol, an action that has “undermined the basis of our most cherished American values, and we condemn them.” (Some legal scholars recently argued why Trump’s Wednesday morning speech did not “incite” violence, legally speaking.)

The college would be following the pattern set by Yale, the University of Pennsylvania and other institutions in revoking Cosby’s degree, and Lehigh University and Wagner College’s rescission of honorary degrees from Trump, the editorial said:

For Middlebury to continue to bestow this honor upon Giuliani — whose actions directly endangered lives while instigating insurrection — would betray its values as an institution. To revoke it would be to fortify them.

The Editorial Board calls for the college to rescind Rudy Giuliani's honorary degree, citing his role in undermining democratic institutions and provoking a violent insurgence targeting the Capitol on Jan 6. https://t.co/kh22ZWNGnx

A spokesperson for Middlebury declined to answer College Fix questions about the role the editorial played in the administration’s decision to consider rescinding the degree, and the timing of Patton’s announcement. She also declined to provide the timeline for deciding whether to rescind the degree, and the criteria guiding the process.

Director of Media Relations Sarah Ray shared Patton’s statement from the newsroom section of its website, which is oddly not listed on the newsroom home page. The statement is buried under the “Campus Notes” tab, where it’s the first post since June.

Patton would only say the administration “has initiated the process we have put in place to consider revoking an honorary degree,” and officials “will have more to communicate to you about this in the days ahead.”

Read the statement and editorial.