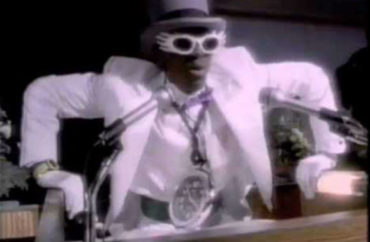 Black studies director criticizes university for not letting him ‘explain himself’

A University of Missouri police officer likely has a better chance keeping his job if he shoots a black man than if he dresses like one.

The financially struggling public university apparently has a zero-tolerance policy around authentic costumes of celebrities: It fired an officer for dressing up like the rapper and reality star Flavor Flav before he was hired by Mizzou in January 2018.

And you can guess why.

Marcus Collins used makeup to darken his face in addition to wearing the signature clock necklace popularized by the hype man for Public Enemy (below) and “Flavor of Love” host.

The university emphasized in a statement Tuesday that it “immediately” fired Collins after he admitted it was him in the “blackface” photo, but it clarified that Collins donned the costume before he was hired.

“This type of behavior is not tolerated at Mizzou, and we understand how this impacts our entire community profoundly,” Chancellor Alexander Cartwright said:

Racism, hate and insensitive behavior have no place on our campus. We are committed to our values of respect, responsibility, discovery and excellence, and to making our campus a place where everyone feels welcome and protected.

Mizzou spokesperson Christian Basi couldn’t answer several questions by the Columbia Missourian about the context of the photo: where it was posted on social media, when it was taken, who alerted Mizzou police to its existence Tuesday morning, and whether potential police hires are subject to a “social media check.”

The Columbia Daily Tribune reports that it received the undated photo from an anonymous source but didn’t specify whether it then sent the photo to Mizzou. (It’s the only news source The College Fix has found that bothers to identify Collins’ costume.)

Basi told the Tribune the firing happened “shortly after a discussion with top university officials,” making clear that the decision to fire came from outside the police department.

A University of Missouri police officer has been fired after a photo emerged of him wearing blackface. Spokesman Christian Basi stated in a press release that officer Marcus Collins admitted it was him in the photo. https://t.co/Sdio7b0Pws

The university’s alacrity was questioned by Stephen Graves, director of undergraduate studies in the black studies department:

“Any time you have gotten a photo by 9 a.m. and by 11:30 that person is fired, it had to have been a hell of a conversation,” Graves said. “I think you do society a disservice when you don’t allow for conversation and the police officer involved to explain himself. That person needs to step in front of a camera and explain the behavior, the who, what, where, why and when.” …

Everyone’s actions, including Collins’, need to be seen in context, Graves said.

“You are always going to go back and find something that someone did wrong,” he said. “How good or bad it is for our society, I am not 100 percent sure. It is going to be hard to find perfect angels to do this job.”

The Tribune contrasts the university’s quick action against Collins with the Columbia Police Department’s “lengthy review” of an officer, Brian Tate, for worse behavior. Tate still has his job:

Columbia Police Department found Tate breached agency policy when he, over the course of several years, posted a number of controversial and derogatory statements on Twitter, exhibiting angst about police reform groups and denigrating people for their demographics.

Tate was indefinitely assigned to duty with “limited interaction with the public” following the department’s findings. Columbia police say they are also reviewing any cases he worked with as a supervisor in the internal affairs unit.

The Fix asked Basi for more details on the incident: how Mizzou determined that Collins’ celebrity costume indicated “racism, hate and insensitive behavior”; whether Graves’ timeline of Mizzou’s firing was accurate; and whether it received the photo from the Tribune or another source.

The Fix also asked Basi to explain the quick firing in light of any union protections for Mizzou police, and whether other university employees should take note that they will be fired if any photo perceived as blackface, including charcoal face masks, becomes public.

Basi responded Wednesday afternoon by pointing back to the university’s vague public statement. Reminded that The Fix was asking for detailed answers to several questions, including union protections for campus police, Basi wrote in an email: “I’m just going to refer you back to our statement.”

UPDATE: University spokesperson Christian Basi responded to Fix queries after this post was published. His response has been added.