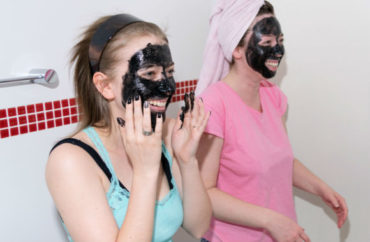 Image itself – not just the caption – shows ‘racism’

The University of Tennessee-Knoxville isn’t waiting to investigate before making broad, public denunciations of its own students and launching an inquisition.

It released a statement Thursday that claimed its students had been caught wearing blackface, citing a Snapchat photo that another student tweeted earlier in the day.

The photo itself doesn’t suggest any intent. One student with a mud-colored substance on his face appears to be taking a selfie of himself and three friends, including another student with thinner charcoal streaks on his face who is looking away. They both appear to be shirtless.

What set off outrage was the caption: “We for racial equality boys. Bout to get this free college now that I’m black.”

The administration didn’t wait for context before publicly denouncing the image itself – not just the caption – as “repulsive.” It said flatly that the image by itself showed “blackface” and “racism.” The Bias Education and Response Team – which the statement misnamed – and Office of the Dean of Students is “determining how to handle this incident.”

I thought long and hard about posting this but it hit an emotional spot for me for people to think that i did not EARN what was given to me because of my race. pic.twitter.com/5ulc1X3jUC

The student who tweeted the photo shared responses she got from students who claimed to be in the photo, including the lone female and the selfie taker.

“I literally thought he was just taking a picture of his face mask,” she wrote. “I wasn’t aware the guy in [sic] who made the post made a racist comment with it.”

The selfie taker, identified as Ethan Feick, confirmed the substances on their faces were “charcoal face masks” intended to “help with acne.” He took responsibility for the caption, a “joke that was certainly not funny in the least.”

Yahoo named all four students in the photo on Thursday and linked Feick’s Twitter account, which he has since removed. Another Twitter user responded to the original poster with screenshots of the students’ Instagram accounts.

Out of all the users calling for the punishment and expulsion of the students, one objected:

This isn’t really Blackface … because it’s not inherently making fun of black people, just a benefit we have in the American education system.

This isn't really Blackface. Yes, it's distasteful, but it does meet the criteria of blackface because it's not inherently making fun of black people, just a benefit we have in the American education system. If they went further with the makeup and caption it would be though 🤷🏾‍♂️

The Knoxville News Sentinel also said the image appears to show the two students wearing “a black skin care mask.” It reported Friday that Vice Chancellor for Student Life Vince Carilli called the image a “hate-filled act” that has “prompted anger and fear in our community.”

Randy Boyd, interim president of the UT System, also tweeted his appreciation for the Knoxville administration’s “swift response” to a photo it didn’t bother investigating before denouncing its students.

A protest on campus defending its controversial “Sex Week” morphed into a protest against the Snapchat photo, according to the Sentinel.

The UTK administration has yet to respond to a College Fix email Friday afternoon asking if it had confirmed the students were intending to display blackface, or that one of them had written the caption, before denouncing them in its Thursday missive to the community.

The administration has already suggested that it won’t release the results of its investigation if it doesn’t fit the narrative it’s currently peddling. “Federal law prohibits the university from sharing how the university handles matters with individual students,” it wrote Thursday.

Universities often misuse the Family Educational Rights and Privacy Act to hide information that is not covered by the law, as its legislative sponsor has acknowledged.