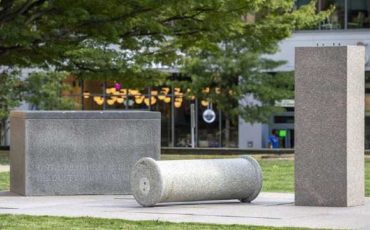 ‘The work responds to an ongoing dialogue about preservation and erasure,’ according to university

Drexel University students this semester will encounter a stone and granite art installation that is a monument to no one.

The Philadelphia university recently acquired the piece, created by Theaster Gates, a “multidisciplinary artist concerned with matters of justice and equity and capital and labor” who teaches at the University of Chicago, according to The Philadelphia Inquirer.

“Monument in Waiting was created during the turbulent summer of 2020 when Black lives were lost…and monuments to leaders of the Confederacy came down all over the country,” the newspaper reported on August 26.

“We started to see that our country was turning very quickly into a militarized state,” Gates told The Inquirer. “All those things are happening at the time that I’m being asked to make something pretty or something that could grab the hearts and minds of people in the Hamptons.”

“I don’t really know a whole lot of heroes,”  Gates continued. “The heroes that I know are people who would never be important enough to deserve a monument.”

“Comprised of reclaimed stone plinths and granite tiles devoid of a figure, Monument in Waiting evokes a dismantled public forum,” according to a Drexel University news release. “The work responds to ongoing dialogue about preservation and erasure, collective memory and public scrutiny of historical figures and monuments, particularly those that reinforce systems of oppression,” the university stated in its news release.

The art piece was first exhibited at the Parrish Art Museum in Water Mill, New York, according to the media statement.

Philadelphia Contemporary, Forman Arts Initiative, and Drexel University acquired the art piece and “unveiled” it in July on the Kormon Quad on 33rd Street between Chestnut and Market Streets, according the news release.

“With Monument in Waiting, Gates responds to the removal of Confederate and colonialist monuments and acknowledges the role of monuments in marking histories of injustice,” the release stated.

Drexel University President John Fry acknowledged the “set of ideals” on which American democracy was founded but stated that the art piece “will give all passersby the opportunity to pause in contemplation about the progress we have made towards fulfilling those ideals, and the distance left for us to travel,” according to the release.

“An inscription engraved on one of the plinths reads, ‘Until real heroes bloom, this dusty plinth will wait.'”