A Canadian music teacher is suing her principal, vice principal, and school board for defamation after they sent an email calling her choice of music for a school play “inappropriate” and “racist.”

According to the National Post, the play’s offensive song is “Land of the Silver Birch,” supposedly inspired by Indigenous poet E. Pauline Johnson. The email from High Park principal Nancy Keenan and vice principal Edita Tahirovic says “While its lyrics are not overly racist … the historical context of the song is racist.”

It adds that “Johnson performed for mostly non-Native audiences, and in a style that ‘…depicted Native people and culture in romantic ways, while lamenting the dying out of Native civilization to be replaced by a superior western civilization.’”

One of the “objectionable” lyrics from the song says “High on a rocky ledge I’ll build my wigwam. Close to the water’s edge. Silent and still.”

The defendants say in their statement of defence that Shearer hasn’t suffered any damage to her reputation, and the claims against them should be dismissed. The allegations have not been tested in court and lawyers for the school board, the principal and the vice principal said they couldn’t comment. … 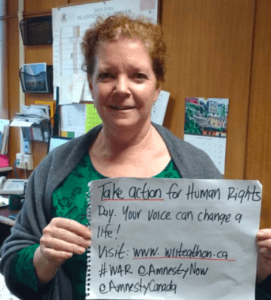 […] the email written by Keenan [seen at left] and Tahirovic explicitly points to Johnson’s work as racist and concerning, which University of Ottawa professor Janice Fiamengo says is “ridiculous.”

“Saying that Johnson lamented the dying out of Native culture is totally wrong,” said Fiamengo, who has extensively studied Johnson’s work and included the poet in one of her books. “She had some very serious works of literature where she explicitly critiqued racism against Native women in particular — she really was a bold advocate for Native people.”

Fiamengo said that while perhaps Johnson did romanticize Indigenous culture, it was only done in an attempt to affirm it. The poet was born in the mid-19th century to a hereditary Mohawk chief and an English mother on the Six Nations reserve near Brantford, Ont.

“Of course affirming Native culture involved romanticizing, because she was trying to defend and uphold a culture that was being marginalized and degraded,” she said. “That’s what people do when they’re trying to advocate for their culture.”

McMaster University’s Rick Monture, a member of the Mohawk First Nation, added that “Johnson was an advocate for Indigenous rights at a time where few people were paying attention to it.”

He said the lyrics to “Land of the Silver Birch” are “outdated” and “cliché,” but not racist.