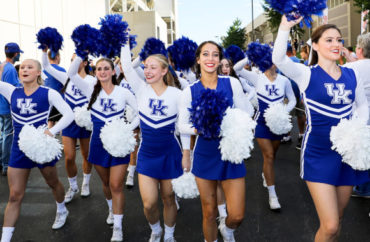 The University of Kentucky has fired its entire cheerleading staff after a three-month investigation found its cheerleaders engaged in public drunkenness, nudity, and hazing.

According to the report following the investigation, at a team retreat at Lake Cumberland, some cheerleaders performed gymnastics routines known as “basket tosses,” which involved hurling their teammates from a dock into the water while either topless (for female cheerleaders) or bottomless (for males.) These routines were done while some of the coaches were present.

“There is no indication that the individuals engaging in this behavior found it to be unwanted or unwelcome,” according to the report.

Coaches also allowed alumni of the cheerleading program to bring boats and alcohol to the retreat, then drive drunk cheerleaders around on the boats while they were partially naked. Further, the cheerleaders allegedly engaged in skinny dipping while at the lake.

According to the report, during the retreat, some cheerleaders became so intoxicated they required medical treatment.

At a separate cheerleading camp in Tennessee, some cheerleaders forced other members of the squad to stand up on a table and sing a song that had major “sexual content.”

“After they sang it once, they were encouraged to sing it again with their clothes off,” said a family member of a cheerleader who complained to the university.

Kentucky’s cheerleading program is the most prominent in the nation, having won 24 of the past 35 national championships.

“The University of Kentucky has built the nation’s premier collegiate cheerleading program. But regrettably, the integrity of the program has been compromised by inappropriate behavior by some squad members on off-campus trips and by lax oversight by the program’s coaches and advisor,” said UK president Eli Capilouto in a statement.

This type of hazing and excessive partying is not exclusive to Kentucky. In 2018, cheerleaders at the University of Kansas reported having been stripped naked during a hazing ritual involving team alumni.

The investigation at Kentucky also turned up some conflict-of-interest charges against several of the coaches. According to the report, two coaches owned their own cheerleading schools and hired members of the UK cheerleading squad to work there, leading some cheerleaders to believe working at these gyms was a requirement for being on the team.

In addition, one of the team’s advisors allegedly asked cheerleaders and assistant coaches to provide personal services for him, including lawn care. The school was concerned that the cheerleaders would feel pressured to do these personal tasks “given the power differential between the Advisor and the cheerleaders/coaches.”