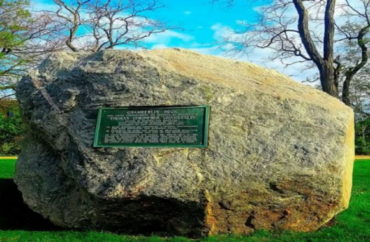 On the morning of publication of this article, The College Fix received word from the UW-Madison spokesperson that Chamberlin Rock was moved today, Aug. 6, off campus.

“Since you last reached out to me, we have gotten the permit and the rock is being moved this morning. It’s just been loaded onto the flatbed that will move it to university-owned property near Lake Kegonsa,” said campus spokesperson Meredith McGlone.

Below is the story that led up to today’s action.

University of Wisconsin Madison leaders have yet to make good on their promise to remove a 70-ton boulder on campus deemed racist by some student protesters.

Progress has stalled as officials review concerns that its removal could interfere with Native American effigy mounds.

“[B]ecause the rock is located within the boundaries of a cataloged human burial site and is within 15 feet of an above-ground effigy mound feature, state law requires that any disturbance of the soil be granted a permit from the Wisconsin Historical Society,” McGlone said via email.

She said the permit relates to the activity that will have to happen to remove the rock, with the goal of minimizing disturbance to the soil.

(UPDATE: Article updated to include image of this morning’s removal)

“[A] date has not yet been determined for the removal; we are still awaiting action by the Wisconsin Historical Society. The removal plan itself has not changed — we plan to remove the rock from the Madison campus altogether,” McGlone said.

Kara O’Keeffe, director of communications of the Wisconsin Historical Society, told The College Fix she cannot speculate as to when the group would reach a decision on how to proceed.

McGlone said the plan is still to remove it.

“We’ll have more information on removal method, cost and new location following action by [the Historical Society]. The university will honor Chamberlin by placing a plaque in Chamberlin Hall,” she said.

The rock was named after Thomas Chrowder Chamberlin, a 19th century glaciologist and University of Wisconsin president.

The boulder had traveled to the region over 10,000 years ago, deposited by ancient pre-Cambrian bedrock drift from Canada, according to its plaque.

Its planned removal came after it was discovered that it was once referred to as “n*ggerhead rock” in the Wisconsin State Journal in 1925. There is no evidence the offensive term was ever used on campus to describe the boulder. The offensive term was a common moniker at the time for large, dark rocks.

But the decision to remove it was unanimously approved by the school’s Campus Planning Committee in November 2020.

Its removal was a highly demanded action item from the Wisconsin Black Student Union and BIPOC students on campus, coming second only to the removal of the Abraham Lincoln statue in a September 2020 petition.

Also petitioning for the removal of the boulder was Wunk Sheek, a Native American student group that “serves students of indigenous identity and members of the UW-Madison community interested in indigenous issues, culture, and history.”

Wunk Sheek did not respond to numerous requests over the last few weeks for comment from The College Fix as to their views of the rock removal project given the Native American effigy mounds issue.

The school’s American Indian Studies program also declined multiple requests for comment from The College Fix, explaining that “No one is available to address your questions.”

According to UW-Madison’s website, “Undoubtedly the best known and most visible legacies of past native peoples at UW-Madison are the earthen burial mounds that are widely scattered across the campus, with several of the most prominent being located in the Lakeshore Nature Preserve.”

Representatives from the Ho-Chunk Nation did not respond to a request for comment from The College Fix as to how the organization viewed the possible disruption of the soil the boulder sits upon.