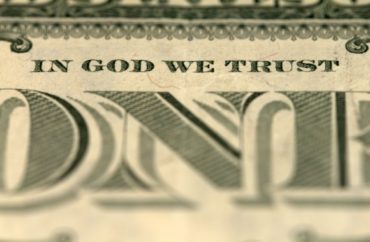 A survey of 1,001 college students from across the nation has found that nearly half believe the motto “In God We Trust” should be removed from U.S. currency.

The online poll was conducted Aug. 22 to Aug. 23 exclusively for The College Fix by College Pulse, an online survey and analytics company focused on college students.

“We live in a secular nation, not a theocracy. Best to remove,” responded one Clemson University student in the comments section of the survey.

“Don’t put it on any $ going forward, but the cost to remove bills from circulation would be crazy, so let it remain on already printed currency,” added another student from CU Boulder.

Some students who favored it offered countering opinions.

“It’s one of the US’s mottos, and all countries put their motto on their currency, so it’s fine so long as it’s a motto,” wrote a student from the University of Alabama.

Another from UMass Amherst stated: “I don’t think it needs to be removed, but it should be a lower case g — ‘god.’ I think that’s a much more open saying that fits with a freedom of religion.”

According to the U.S. Department of the Treasury, the motto was first placed on United States coins due to an increase in religious sentiment during the Civil War, and that “since 1938, all United States coins bear the inscription.” It first appeared on paper money in 1957 on the one-dollar silver certificate, then gradually grew to all denominations. “In God we trust” is also America’s national motto.

In Aug. 2018, a federal appeals court ruled that “In God We Trust” on U.S. currency is constitutional, “citing its longstanding use and saying it was not coercive,” Reuters reported. More recently, in June, the U.S. Supreme Court rejected hearing an appeal of that ruling sought by the atheists who originated the case.

Meanwhile, it appears college students are nearly evenly divided on the issue, but a breakdown of the data shows Republican students favor the motto on money much more than Democrat students.

Two-thirds of Democrat respondents are in favor of removing the motto, while only 6 percent of Republican respondents said it should go.

As for how students responded by race, black students who took the poll showed the most support for keeping it at 69 percent in favor, followed by Asian students at 57 percent, white students at 51 percent, and Hispanic/Latino students at 50 percent.

Under sexual orientation, the breakdown showed that 69 percent of students who identify as LGBTQIA+ are in favor of removing the motto, while only 38 percent of straight students are.

Asked to weigh in on the results, UNC Wilmington criminology Professor Mike Adams, a Christian involved in an apologetics training program called Summit Ministries, said the results do not surprise him.

“Nor does it alarm me as I have been painfully aware of the profound constitutional ignorance of young people for many years,” Adams told The College Fix on Tuesday. “They take the phrase ‘separation of church and state’ literally and out of context because they think it is in our constitution, which they have not read.”

“There is no reason why the phrase should not be on our currency,” the professor added. “It does not establish a religion. Capitalism is impossible in a society without morals. Absolute morality is impossible without God. Hence, the phrase should stay regardless of any objections leveled by constitutionally illiterate secularists.”

And Corey Miller, president of the nationwide campus ministry Ratio Christi, told The Fix: “While I’m not surprised, I’m saddened. A generation or two has lost touch with its heritage. For all the talk of equality in America, few realize that it is the theistic foundations that ground it. In our ‘progressive’ removal of God, we should beware of what follows.”

About the poll: The initial sample was drawn from College Pulse’s Undergraduate Student Panel that includes over 240,000 verified students representing more than 800 different colleges and universities in all 50 states. Panel members are recruited by a number of methods to help ensure diversity in the panel population, including web advertising, permission-based email campaigns, and partnerships with university organizations.

To reduce the effects of any non-response bias, a post-stratification adjustment was applied based on demographic distributions from the 2017 Current Population Survey (CPS). The post-stratification weight rebalanced the sample based on the following benchmarks: age, race and ethnicity, and gender. The sample weighting was accomplished using an iterative proportional fitting (IFP) process that simultaneously balances the distributions of all variables. Weights were trimmed to prevent individual interviews from having too much influence on the final results.

The margin of error for this survey is ±3.5%. Margins of error are typically calculated on probability-based samples and are not technically correct for nonprobability online samples. We supply them here to provide a general assessment of error ranges that may be associated with the data.