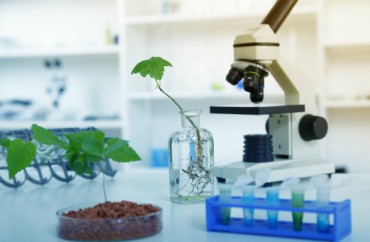 Michael J. Behe has made a career out of questioning the assumptions that surround the theory of evolution. In “Darwin Devolves: The new science about DNA that challenges evolution,” the biochemist furthers his protests against the tide of evolutionary science.

What evolutionary theory cannot do sufficiently for Behe is explain the “why” of the machinery of life. He credits Darwin for having the best explanation for “how” living beings evolved, but not for why they did. It’s this deeper question that readers will ponder as they finish “Darwin Devolves.”

Behe, a professor at Lehigh University in Pennsylvania, helped kick off the “intelligent design” movement with his 1996 book “Darwin’s Black Box,” which explained the concept of “irreducible complexity.” He’s a senior fellow at the Discovery Institute, the institutional home of intelligent design.

The book focuses on problems with consensuses surrounding Darwinian evolution, and while the text can get dense at times due to the technical nature of Behe’s writing, the book still effectively problematizes discussions around evolution. He argues that Darwinian evolution is “powerfully devolutionary,” promoting “the rapid loss of genetic information.”

Behe critiques Darwinian evolution for supplying popular science and culture with crutches and assumptions – embedded in the very language of the theory – to avoid answering more complicated questions.

“Now, what information is lost by deleting the word ‘evolved’?” Behe asks:

In fact, the word “evolved” in the sentence carries no information. It’s just a science-y, content-free salute to the notion that everything about living beings – pointedly including the human mind – simply must have come about by the ordinary evolutionary processes that biologists study. 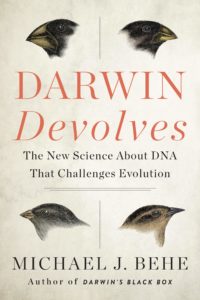 This “territorial imperative to plant Darwin’s flag everywhere” is indicative of what Behe describes as “pretend knowledge” about evolution, used by both popular media and scientific journals. It signals to the reader, in a lazy way, a sort of scientific authority that is not backed by real evidence at all, and begs the question concerning scientific understanding of evolution, which Behe seeks to complicate, or at least question.

Behe’s book varies between highly technical explanations of genetics and more accessible real-world examples. One particularly memorable passage discusses the movement of a grasshopper and how the legs work as gears shifting into place. It’s a memorable example, Behe points out, because it’s relatable and comparable to real-life machinery. Moreover, it’s easy to see the purpose of the leg gears: they serve to keep the grasshopper moving effectively.

Evolution is appealing because it offers humanity hope, Behe argues. “It’s easy to fall in love with evolution. Reading about a simple variant of a common moth that survives in a polluted environment better than its predecessor or bacteria that can eat industrial runoff can give one hope for the future, that maybe we humans can’t mess up nature too much,” he writes.

But Behe advocates that life hasn’t evolved – it has actually devolved, akin to diminishing returns. “In any case, [life] will never have greater genetic wealth than what it inherited,” he writes, suggesting a genetic decline through generations.

In the final chapter of the book, Behe moves away from scientific discussion and into the realm of philosophy in a surprising turn that doesn’t quite work. He discusses proofs for the existence of the mind, the role of language in intelligence, and the relationship of science to reason. It reads more like an overview of several disparate topics put together to advance arguments that could fill up thousands of pages on their own.

Behe demonstrates a wide grasp of the topics, however, and one wishes he would expand the final chapter into an entire book, given that its brevity undermines its arguments. As it stands, the decision to shift away from specific discussions of evolution is thought-provoking, but not entirely successful in advancing a cogent argument concerning the purpose of science.

What is unquestionably successful about Behe’s book is how it takes apart the appeal to “evolution” as some sort of catch-all answer to questions raised by genetics and biology. And while Behe slips into technical jargon from time to time, the book is also largely accessible and informative for the layman.

It’s at its best when dismantling an over-reliance on evolutionary explanation, and the reader will be able to come away with a more complicated view of what has been long held as popular scientific consensus. The book doesn’t put to bed the debate between evolution and intelligent design, but rather continues to try to complicate it.