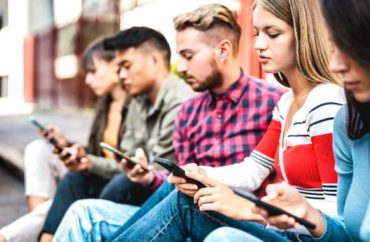 Students, faculty and staff can use the system to anonymously text administration reports of ‘misconduct and integrity issues’

Students at Clemson University can now anonymously report real or perceived misconduct by peers, faculty or staff with a single text.

The public, South Carolina-based institution recently announced it would become the first university to offer campus-wide the “RealResponse platform,” described as an “anonymous ethics reporting app” and a way to make the school “safe,” officials stated in a mid-October news release.

The Clemson Athletics Department has used it since 2016, and now it is being expanded to everyone; Clemson students, faculty and staff can use the system to anonymously text administration reports of “misconduct and integrity issues.”

“Students, faculty and staff can now send anonymous text tips, including photos and videos,” the university stated in the news release. “Activity on the platform is monitored by Clemson’s Office of Internal Auditing and the Office of University Compliance and Ethics.”

“Clemson administrators want to encourage the reporting of misconduct, but the university already provides several channels for anonymous reporting,” Emily Cope, a Clemson undergraduate, told The College Fix on November 26.

“The difference with RealResponse is that students and faculty have the ability to make reports in real-time photos and videos. Third parties may be videoed or photographed without their knowledge or consent, and their alleged ‘misconduct’ permanently documented by the university,” she said.

“If there is a genuine concern, students should contact the appropriate authorities to intervene instead, not bureaucratic university officials whose real concern is protecting the university itself,” Cope said.

“These individuals may or may not consent to be videoed or photographed for wrongful misconduct allegations that others deem as ‘harassment’ or ‘discrimination’ according to Clemson administrators’ arbitrary standards,” the student journalists said in an Oct. 18 editorial. 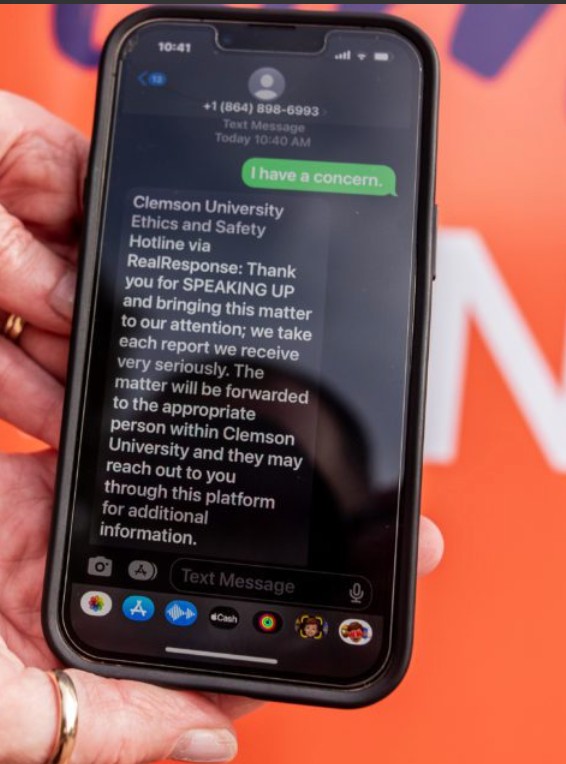 RealResponse, formerly RealRecruit, was founded in 2015 as a way for student athletes to “confidentially deliver concerns and feedback to their administration,” according to its website.

It has been used by more than 100 schools as well as amateur and professional sports groups, such as the Denver Broncos and Kansas City Chiefs.

The College Fix reached out to RealResponse via an online messaging form to ask whether they foresee any drawbacks to use of their services to report misconduct and whether they have plans to expand university-wide services to any other schools.

No response has been received.

“Encouraging and implementing safe environments for everyone at Clemson is an utmost priority for us, and this platform helps Clemson support those endeavors,” said Tracy Arwood, chief ethics and compliance officer and associate vice president at Clemson University, in a news release.

“The addition of RealResponse to Clemson’s existing reporting channels provides yet another option to encourage the reporting of misconduct by ensuring that people have a variety of pathways to make a report.”

‘It really shows that our school cares about student and faculty wellness and makes me feel very safe to be here,’ student wrote

Clemson sophomore MaryKate Stewart stated she was unaware of the hotline in a text to The College Fix on November 21. However, she expressed a favorable view of the system as described in Clemson’s announcement and on RealResponse’s website.

“My initial thoughts on it are that it is a really great thing to have on our campus and in national organizations,” Stewart said via email. “From what I read, it seems to be something that can be anonymous, which is a really important aspect in reporting concerns. Many people won’t report certain concerns due to fear of backlash from their peers, staff, etc.”

“It really shows that our school cares about student and faculty wellness and makes me feel very safe to be here,” Stewart continued.

When asked how she feels about the prospect of students recording each other, Stewart responded, “I understand peoples’ concerns with this, but I think in general, people wouldn’t take advantage of the program like that.”

“These folks definitely have a point though,” Stewart said. “It brings up the ethics of new technology and how most things in life can be used for good and bad, and you just hope the good people use it for the right reasons and don’t abuse it.”

The Fix emailed the Clemson Board of Trustees via their executive secretary, Major General Henry Morrow, on November 18 to ask whether they were involved in the decision to implement the app. The Fix has not received a response.

The Fix also emailed Debra Galloway, Clemson University’s executive assistant to the vice president, on November 20 to ask for comment on the progression and expectations from RealResponse. No response has been received.

Editor’s Note: Emily Cope is a contributor to The College Fix. 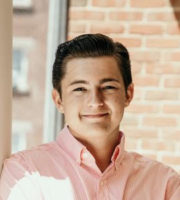