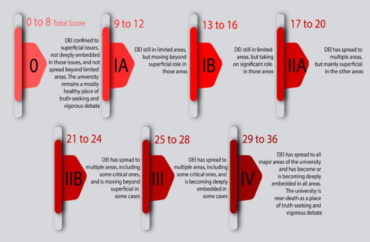 Center-right scholars have developed a measurement tool “scorecard” that allows students, parents, taxpayers and legislators to determine how embedded diversity, equity and inclusion principles and practices are at a given institution.

It will “allow stakeholders to assess the damage already done and identify areas for action,” said Portland State University Professor Bruce Gilley in a news release that called the tool a way to measure DEI “sickness” levels at colleges and universities.

The tool consists of a list of 36 items that colleges typically engage in, such as: requiring DEI statements for new hires; mandatory DEI trainings and orientations; equity grading mandates; land acknowledgements in university documents; DEI directors among top leadership; campus police trained in DEI; and optional pass/no pass allowances or other “de-grading” methods.

Observers mark a “scorecard,” with one point given for each DEI practice identified.

A school falling in the zero to eight range remains a “mostly healthy place of truth-seeking and vigorous debate,” according to the grading rubric. Scores that fall within nine to 20 are showing signs of superficial but growing DEI trends.

Scores of 21 through 36 are deep red flags, according to the grading rubric.

A university that receives a score greater than 29 is deemed “near-death as a place of truth seeking and rigorous debate.”

“DEI ideology is now deeply embedded in most colleges and universities around the country, but the public needs measurable ways to chart its spread and plan its defeat,” Gilley stated in the release.

In an email to The College Fix, Gilley added the DEI tool was developed to “give concerned members of the public some way to see the extent to which DEI has spread in universities, almost unnoticed.”

“If you can’t measure it, you can’t fix it. We also need some way to compare. Clearly, not all colleges are equally sick with DEI. We consciously used a stages of disease model because we think that this is like a disease in a college or university,” he said.

“We plan to apply it first to the three major public universities in Oregon. A lot of the utility of this will depend on the complex issues of coding, and inter-coder reliability, so we hope to develop some documentation that helps people get valid results when they want to apply it to their own state, or any series of colleges, for example, the Ivies.”

DEI-driven policies and faculty have become overwhelmingly prevalent on college campuses. In 2019, 98 percent of the top 200 colleges and universities had DEI-specific staff and initiatives embedded in their campus, according to an analysis by the Daily Caller.

Big DEI programs are extremely expensive and have cost taxpayers and students a growing amount of money, partly because top-level DEI-dedicated faculty and staff earn significantly higher salaries than their scholarly colleagues.

According to a Fox News review, at the universities of Michigan, Maryland, Virginia and Illinois, along with Virginia Tech, top diversity employees earn salaries ranging from $329,000 to $430,000, immensely surpassing the average pay for the schools’ full-time tenured professors, who earn between $100,000 and $250,000 on average.

A report published by the Martin Center, a nonprofit institute dedicated to improving higher education in North Carolina, reviewed the amount of money the UNC college system allocated to DEI initiatives.

“DEI, more than a simple way of thinking or a mere teaching material, has become a budget line item, as most UNC-System schools now have DEI-specific staff as well as departments. In total, 14 of the 16 schools have staff who specifically promote DEI, resulting in over $11 million going towards DEI staff salaries within the UNC System,” according to the analysis.

And according to a report by the Heritage Foundation, the average university sampled recorded more than “45 people as having formal responsibility for promoting DEI goals.”

“DEI staff listed by universities totaled 4.2 times the number of staff who assist students with disabilities in receiving reasonable accommodations, as required by law.”

Additionally, the analysis found that the average university “had 3.4 people working to promote DEI for every 100 tenured or tenure-track faculty members.”

DEI policies on college campuses “that pass muster with a modern-day academic search committee will not be about diversity, equity, or inclusion at all. Instead, it will outline the applicant’s plans for using the power of his or her position to punish those whom the establishment deems oppressors while showing favoritism to those designated as victims,” according to Jenkins.

Editor’s note: The article has been corrected to note one of the scorecard criteria is campus police DEI efforts.

MORE: U. of Oklahoma dedicates full week to diversity, equity and inclusion