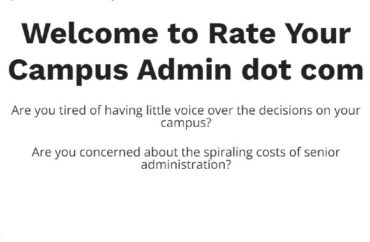 ‘We believe in the power of symmetry and transparency, of open evaluation, for and by faculty,’ website states

“At RateYourCampusAdmin.com, you will have the power to evaluate the performance of the senior administrators on your campus, through a thoroughly researched, robust means for aggregating expert opinions about the quality of the service they deliver to your community,” the frontpage states.

The website’s home page displays a series of questions such as, “Are you tired of having little voice over the decisions on your campus?” and “Are you concerned about the spiraling costs of senior administration?”

The site said the goal is to give faculty the power of “symmetry” and “transparency” as they evaluate the effectiveness and overall likeness of the senior administrators.

University of California San Diego sociologist Juan Pablo Pardo-Guerra created the website and launched it in early September. He created it as a critique of the grading and evaluations of academics, according to comments he posted on Twitter and an interview with The Chronicle of Higher Education.

“Pardo-Guerra said the project started out as ‘a bit of a funny joke’ and ‘a criticism of higher education,'” according to the education publication. “But he’s open to the possibility that the website could actually serve a purpose.”

https://t.co/rAklACgSvG is inspired by efforts to quantify our labor as academics–through teaching evaluations, publication counts, citation metrics: you name it! It recognizes, however, that these efforts are asymmetric.

The website “is inspired by efforts to quantify our labor as academics–through teaching evaluations, publication counts, citation metrics: you name it! It recognizes, however, that these efforts are asymmetric,” Pardo-Guerra tweeted.

He did not respond to an email on September 13 that asked for reactions he had received, what his goals are for it and what he does to vet submissions. The College Fix sent similar questions to a different email for the website twice in the past week.

His boss at the public university is listed on the website and has two stars out of five.

“We’ve added thousands upon thousands of students, gained new buildings, and collected billions in donations. But is campus a better place? I’m unsure,” an evaluation of UCSD’s chancellor Pradeep Khosla states. “Indeed, if anything, the feeling we are left with is that campus looks more and more like the new Target at Price Center, and less like a university interested in promoting knowledge across the board.”

Scott Hagan, the president of North Central University, is on the website as well. “It’s relatively clear that he’s out of his league in his role,” one evaluation reads. “The mood at work is extremely low amongst employees and most point their challenges back to him.”

The Fix reached out to both President Hagan and Chancellor Khosla twice in the past week to inquire about what they thought of the website, and if they had any concerns about being mentioned on the website, but neither responded.