A New York City principal sent an email to her staff this past week urging them to “take action” in support of Palestinians during the current crisis in Israel and Gaza.

According to the New York Post, the email from Middle School 136’s Amanda Bueno reads “You can take action today by protesting, attending a vigil, making a public commitment to Palestinian Liberation, signing a petition, or calling your government officials to place sanctions on Isreal [sic].”

The message also says people “need not prove [Palestinians’] humanity and right to exist […] Empathy is a bare minimum.” It includes various hashtags such as #GazaUnderAttack and #SaveSheikhJarrah.

“Additional resource” links at the end of the email feature the Teach Palestine website, the main page of which states “We know you share our outrage at attacks by the Israeli military and settlers against the people of Palestine.”

Teach Palestine also has a “Stolen Land” section which compares the plight of Palestinians to illegal immigrants in the U.S.

Another link goes to a Common Dreams column dealing with U.S. Representative (and “Squad” member) Rashida Tlaib’s criticisms of Israel. 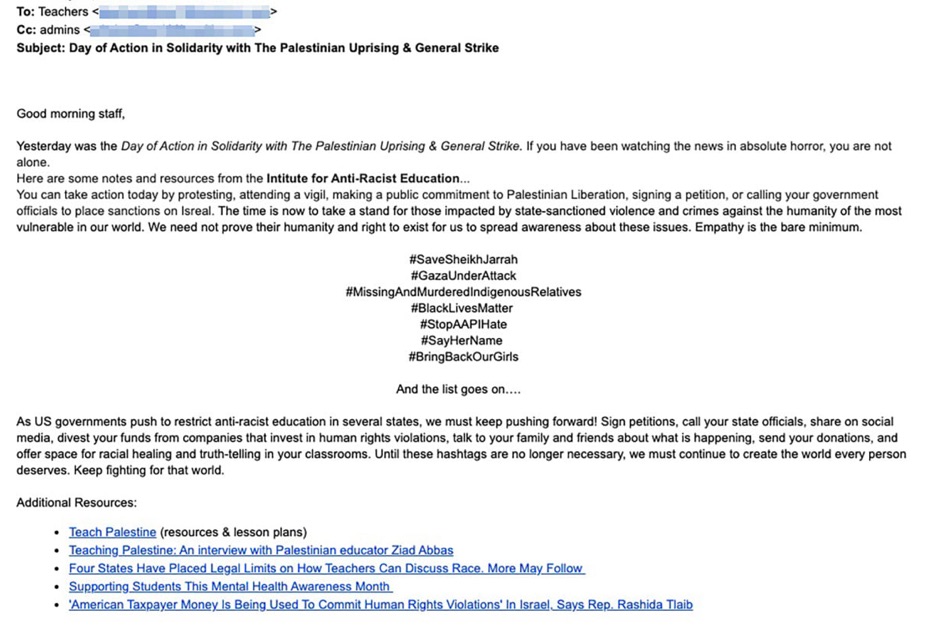 Criticism of the email was swift. One of Bueno’s teachers, a Jewish woman, said she felt “targeted” and “very attacked” by it. Parents spoke out as well:

“Wrong, wrong, wrong,” said one man who was there to pick up his son.

“Stay in the middle. You are saying, ‘Support this group and not the other.’ That’s wrong.”

A man who gave his name as Edward and said his son was a sixth-grader, said, “I don’t take sides. As a principal, I don’t think she should.”

A man who was picking up his daughter also said, “She should remain neutral because in New York, you have so many different groups of people.”

Bueno does have her supporters, perhaps most notably activist Linda Sarsour who said the principal should be defended “for doing the right thing”: