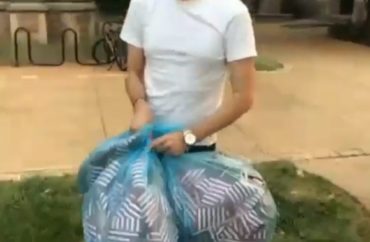 Washington University in St. Louis does not appear to have taken any steps in the past month to punish a student government official named Fadel Alkilani who admitted to a “Flag Relocation Incident” on campus on September 11.

Alkilani, the vice president of finance for the Student Union can be seen on video with a bag of American flags placed on campus by the College Republicans chapter in commemoration of the terrorist attacks on September 11, 2001.

The College Fix emailed university news director Susan McGinn and spokesperson Chuck Finder twice to ask for an update on the situation but received no response. McGinn told The Fix on the phone on September 27 that she would respond to questions but has yet to respond. The Fix emailed again on October 6 but has yet to receive a response as of October 18.

The Washington University police department has not responded to a request for comment as of October 14.

“It seems like the school is dragging its feet on handing down a punishment,” spokesperson Kara Zupkus told The College Fix via email on October 6. “We’ve been in contact with the CRs, who have attended several meetings with university administrators––but no punishment has been decided yet.”

The national spokesperson said she believes the private university is hoping the controversy goes away on its own.

“I’m sure the school is hoping the media attention dies down and then they can sweep it under the rug,” Zupkus said. “But we plan on launching another PR campaign against the school should they decide they won’t punish him.”

The College Republicans did not respond to emailed requests for comment sent in the past three weeks.

The Student Union did not respond to two emailed requests for comment in the past three weeks to the general media email. The Fix asked the Student Union if it plans to punish Alkilani, its vice president of finance.

The College Fix asked if the student government could forward requests for comment to Alkilani and if the Student Union planned to investigate his actions.

“I had no intention of removing the flags from the Mudd Field area, and my full protest did not have the chance to be actualized,” Alkilani previously said in a statement. “My planned protest was to place the bags of flags on Mudd field, along with various statistics (including those below) explaining the human cost of 9/11 in the past 20 years,” Alkilani said, according to Newsweek.

The College Fix also reached out to the St. Louis police department, but a spokesperson, Michelle Woodling, said the incident “did not occur in our jurisdiction.”

While neither the student union nor the university appears ready to take action against vandal, one Washington University law school professor says the student acted ethically and lawfully.

“Putting up these flags as a way of commemorating 9/11 and making a political statement about 9/11 — there’s no question that that is an act of speech, that that is expressive, that it carries a message,” Professor Greg Magarian said, according to the school’s newspaper. The law professor responded to a statement from the university’s chancellor that criticized the theft and vandalism.

“I think there’s no also no question that as a category, as a phenomenon, taking down the flags in opposition to the display is also expressive,” Magarian said, defending Alkilani’s actions.

Other students wanted Chancellor Andrew Martin to apologize for not speaking out against alleged Islamophobia addressed toward Alkilani. They held a protest outside of his home on September 24.

“Conservative media outlets’ coverage of the events has also led to widespread Islamophobic comments and posts on social media,” the campus paper Student Life reported, though it did not provide photos or any proof of the Islamophobia.

MORE: Born after 9/11, these students honor the fallen