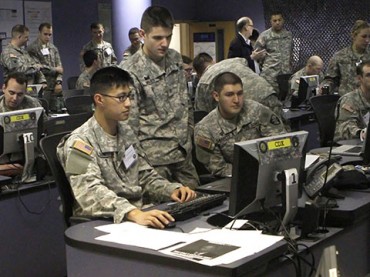 The National Security Agency, now defined largely by Edward Snowden’s revelations about its pervasive reach into every sphere of digital life, is aiming to put a positive light on its work by growing its educational presence in universities nationwide.

The effort is designed “to reduce vulnerability in our national information infrastructure by promoting higher education and research in IA [information assurance] and producing a growing number of professionals with IA expertise in various disciplines,” the NSA said.

The program has stirred controversy, though.

Arizona State Sen. Kelli Ward, a Republican, introduced a bill to ban the NSA from recruiting at state university campuses, the Fourth Amendment Protection Act (SB-1156), as The College Fix reported in January. Arizona State and the University of Arizona both work with the NSA under the National Centers of Academic Excellence Program.

SB-1156, the first to be introduced based on model NSA legislation from the Tenth Amendment Center, was not approved before the Legislature adjourned for the year. An Arizona State law professor told the ASU State Press that the bill, which also bars state cooperation with the NSA in legal and financial matters, would violate the federal Supremacy Clause if enacted.

While several other states’ lawmakers have jumped on board, the model legislation has yet to be approved anywhere, according to the Tenth Amendment Center’s tally.

One enthusiastic participant in the NSA Cyber Operations Program is Auburn University, whose computer science and software engineering department has worked with the NSA since the early 2000s and was accepted with the program’s establishment in 2013.

Madeline Duncan, a junior at Auburn, told The College Fix she hopes that the Fourth Amendment Protection Act does not make its way into law.

“If the NSA programs are kept out of schools, students are deprived of an opportunity,” Duncan said. “If the NSA is allowed on campuses, than students are given a choice. No one is being forced to take a job with the NSA or involuntarily being educated by the NSA. When choice is taken away, that’s when it becomes a concern.”

Kai Chang, department chair, has watched the program grow for more than a decade.

“Well, I think it has done a great job for us, especially attracting our students to participate in cyber security,” Chang said. “I think the reason we have success is … faculty members [are] very aggressive in attracting students to the program.” The NSA also provides support to faculty and students through scholarships, he added.

No outside work for the NSA is performed on the campus, with Auburn sticking to a strict program that has pleased both the faculty and students, Chang said.

“As college students, we should be able to make our own decisions regarding what’s best for ourselves, education and careerwise,” Duncan said.