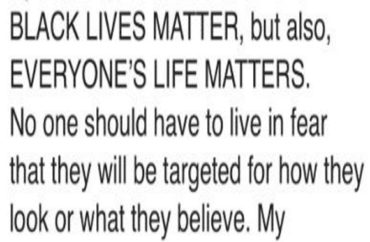 University claims statement was not reason for termination

Dr. Leslie Neal-Boylan, dean of the University of Massachusetts-Lowell’s Solomont School of Nursing, was fired in mid-June after writing “everyone’s life matters” in an email to students.

In a statement from the university, spokesperson Nancy Cicco told The College Fix “it would be incorrect to assume any statement by Dr. Neal-Boylan was the cause of” her June 19 firing.

The Fix asked Cicco why Neal-Boylan was fired, if not for her comments, but Cicco said in her statement that “we are not able to discuss specifics of a personnel matter.”

Cicco did note that the decision to fire Neal-Boylan “was made in the best interest of the university and its students.”

The Fix was unable to contact Neal-Boylan for comment. Her biography page has been taken down by the university and it now shows a 404 error, meaning it no longer exists.

While the university maintains that the email was not the reason for her firing, Neal-Boylan believes otherwise.

The former dean wrote it “seems clear” her bosses “used my email regarding Black Lives Matter (BLM) as rationale to fire me” in a letter obtained by Campus Reform.

Neal-Boylan pointed to her clean record as an educator as evidence and added “I have never (in a 40 year career) been accused of racism.”

The controversy began when Neal-Boylan sent a June 2 email to students regarding recent events related to the Black Lives Matter protests.

She opened by saying that the purpose of her writing was to “express my concern and condemnation of the recent (and past) acts of violence against people of color.”

Neal-Boylan continued by lamenting “the history of racism and racial bias that continue to thrive in this country.”

One UML student tweeted out screenshots of the email and expressed her outrage.

An upsetting statement made by the Dean of Nusing at UMass Lowell, including the statement ‘all lives matter’ was uncalled for and shows the narrow minded people in lead positions. A sad day to be a nursing student at UML. Dean Leslie Neal-Boylan your words will not be forgotten. pic.twitter.com/a9rTd4NGVP

She said it was “a sad day to be a nursing student at UML. Dean Leslie Neal-Boylan your words will not be forgotten.”

The university tweeted in reply, “Thank you for bringing this to our attention. The university hears you and we believe black lives matter.”

Haley – Thank you for bringing this to our attention. The university hears you and we believe black lives matter. See the letter the chancellor sent out Monday. https://t.co/WIrxOSC8o9

Two weeks later, Neal-Boylan was fired. In her letter, she claimed she was not given an opportunity to defend herself and that she was “condemned without trial.”

Writing on the controversy, George Washington University law Professor Jonathan Turley pointed out that “Neal-Boylan was heralded last September as a ‘visionary leader’ by the university in taking over the deanship. Her writings include strong advocacy for those with disabilities in the nursing field. Those writings show tremendous empathy and concern for inclusivity in the profession.”

“One can understand that many felt that the statement detracted from the need to focus on the treatment and loss of black lives. However, one can also read these words as a nursing dean expressing opposition to all violence,” Turley wrote on his personal blog.

“What is ‘in the best interest of the university and its students’ should include free speech and due process. The mere fact that we do not know if Dr. Neal-Boylan was afforded either right is chilling. If there were other grounds against her, the university should state so. Instead, the clear message to faculty is that the dean was fired for expressing concerns over the loss of lives across the country in these protests.”