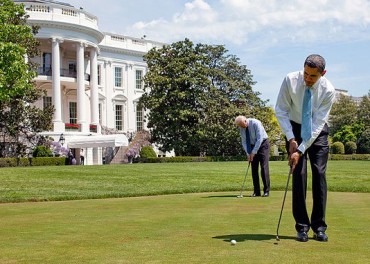 Presidential elections always seem more consequential than they really are. A loss feels so final, so fatal. A victory feels so much like hope. But, in the end, luckily, presidents aren’t all that powerful.

Don’t get me wrong. Elections have consequences. That seventeen trillion dollar national debt we now have is real. The loss of liberty Americans will suffer under Obama’s healthcare mandate, and the corresponding debt burden our children will carry—it’s real.

The national security threats we face abroad and at home, exacerbated by bad decisions in the White House—very real. Let’s hope Obama can handle a nuclear-armed Iran better than he did the rabble riot in Benghazi. He may get the chance to try before his second term is out.

The consequences of election 2012 are real, but the differences are on the margins. Look at the Bush years. We had a huge increase in entitlement spending with the Medicare prescription drug plan. Republicans hardly batted and eye as they voted for it. A few years later, Obama took things a step closer to a European style healthcare system. Subtly, slowly, but oh so surely, we are trading quality, choice and innovation for the illusions of security. And boy, what a price tag.

Democrats, Republicans—the direction is the same, only the pace of change differs.

In recent decades, even a large Republican-appointed majority on the Supreme Court could not achieve basic protections for the unborn in this country. And our abortion laws remain even more liberal than those in Europe. The court appointments are consequential—yes–but only, it seems, on the margins.

Except, sometimes, there is something different. Every once in a while someone comes along who actually changes hearts, and changes the course of history. It’s called leadership. Not the leadership of the boardroom variety, not leadership of the committee.

I’m speaking of a different kind of leader—one who speaks to the soul of a nation. A Churchill or a Lincoln comes along, usually when he’s most needed, in a critical hour, in a moment of danger, when everything’s on the line.

That hour, in all likelihood, will come sooner to America than any of us would like. National calamity strikes once every three or four generations. It’s inevitable. Big wars. Viral epidemics. Economic collapse. Nuclear winter. Trials that could make 9/11 or Hurricane Sandy look like the easy times. Our hard days will come.

Cormac McCarthy gave us one possible view of the future in his novel, The Road. It’s a horror story more terrible than anything Hollywood ever dreamed up, mostly because it seems so plausible. Food supply, civilization, law and order—it’s all very fragile. The lesson: We’ve been very lucky so far.

The man from Massachusetts, for all his talents, was never cut out to be a game-changing leader. He’s a talented, decent man. But Romney was never going to do more than manage America’s decline. He is gifted with the ability to manage people, not to change hearts. One never got the feeling that Romney really knew what he wanted to do when he got to the White House.

I get the same feeling about the guy from Chicago. For him too, being president feels like an end unto itself. For all the hyped rhetoric we heard four years ago, all the talk of hope and change, this year Obama articulated no reason for a second term, no vision. Ask a Democrat what they want to see happen in the next four years. All you’ll hear is, “We want Obama.” It was about holding onto power, warming a chair in the oval office for four more years.

Democratic voters didn’t show up at the rallies this year. For them, it was about keeping the other guy out, not keeping their guy in. It was, as Obama said, the year of “revenge.” The president is out of ideas, and his followers feel the difference.

Obama’s legacy is more about symbolism than politics. He’s the antidote to the poisons of racism and slavery. Obama is the leader of a personality cult that, almost coincidentally, led to political consequences. Letting him ride free on Air Force One for eight years will be the price of washing our hands of the sins of our fathers.

Almost certainly, Obama will accomplish next to nothing for the next four years. Filibusters in the Senate, and the Republican majority in the House, will make sure of it. And even if Obama had super-majorities in Congress, I’m not sure he really knows what he’d do with it. Ultimately, that’s a good thing. His lack of vision limits the damage he’ll do.

Once in my lifetime, I’d like to see a president step down after his first term, to decline to stand for reelection, to admit, openly, that he has nothing left to contribute of any importance.

For now, inconsequence reigns supreme on Pennsylvania Avenue. My plea for Obama is this: enjoy your power, but please, do no more harm. Leave the Marxist platitudes on your bookshelf. I have numerous family members and friends who can’t find jobs and are losing their homes.

My best hope for the next four years is that Obama will play a couple hundred more rounds of golf. Out there on the fairways and greens, he’s done his best work as president.

Before long, the reign of inconsequential men will collide with some dreadful turn in human history. I’m not being pessimistic, just realistic. And when that day comes we won’t be able to afford the kinds of leaders we have now. We’ll have to find another Lincoln.

(Cross-posted from the International Business Times)