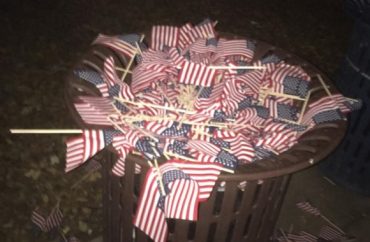 At Occidental College on Saturday, vandals trashed 2,977 U.S. flags planted in the quad to memorialize those who died on Sept. 11.

The students who planted the small American flags found them uprooted and thrown in campus garbage cans. Every last flag. Some were even snapped in half.

Not only that, dozens of makeshift fliers accompanied the vandalism. Taped to benches and other surfaces, most of the fliers stated “R.I.P.” to 9/11 victims as well as to 1.45 million Iraqis who died “during the U.S. invasion for something they didn’t do.” Sophomore Alan Bliss, a math and economics major who helped lead the effort to plant the flags, told The College Fix in a telephone interview Sunday that when he and a friend came across the destroyed memorial, three students confronted him and said they found the display “triggering.” He said the students also accused him of white privilege and ignorance.

Occidental is a small liberal-arts college in Los Angeles known as far-left. President Barack Obama attended for two years before transferring to Columbia.

“So when the right or even moderates try to do something on campus there is extreme push back,” Bliss said of his school, adding conservatives are a “silent majority” there and some students are even scared of speaking up against progressives for fear of retribution.

As for the display, Bliss said it was installed Saturday afternoon by his conservative student club, which is affiliated with the College Republican National Committee and Young Americans for Freedom, the latter of which helped sponsor the “Never Forget” memorial project.

Later that night Bliss said he learned bandits had uprooted and tossed the flags. When Bliss and his friend arrived at the scene, it was 12:30 a.m. Sunday morning. The three students who told Bliss the display is triggering denied involvement in the vandalism, he said.

Campus safety was called and officers took statements from Bliss as well as the other three students.

Meanwhile, Bliss added, as word spread on social media that the “Never Forget” memorial was razed, students left their dorm rooms in the middle of the night to help replant the flags. As students came home from parties, they chipped in, too.

“They were just like, ‘I am not Republican, I am not conservative, but this is a terrible act,'” Bliss said. “They stayed there late into the night, 2 a.m., planting flags. It was pretty amazing, it was pretty touching.”

A Facebook post from the club offers more details on the long evening: “Later that morning, a few of us stood guard at the memorial. Four Occidental students came up and snapped a few flags right in our faces. When we confronted them, those cowards got away as fast as they possibly could.”

When Bliss (pictured) and his friends returned to the display after breakfast Sunday morning, he said he found another 100 flags trashed. And again, Bliss and his peers replanted.

Bliss, 20, co-founder and president of the club, which he launched in the spring of 2016, said he plans to fight back.

“Right now the administration knows about it, they say they are going to handle it,” he said, adding he is also talking with attorneys.

His club went through the proper channels to reserve the quad for the display, and if the incident wasn’t vandalism in the eyes of campus police, it is certainly a violation of school policy worthy of suspension or expulsion, he said.

“We don’t yet know who is responsible for this incident, but the College is investigating and will take appropriate disciplinary action,” stated the email, a copy of which was provided to The College Fix by a campus spokesman.

“Freedom of speech is protected by the First Amendment. The right and freedom to debate complex, contentious issues and disagree with each other is fundamental to what we do at Oxy. At the same time, we may not express ourselves in ways that prevent others from engaging in protected speech,” it added. “… Vandalism or other acts that substantially interfere with the rights of others to engage in protected speech violate the College’s Student Code of Conduct and the spirit of this institution. Let us work together to find ways to express ourselves and build a community founded on respect.”