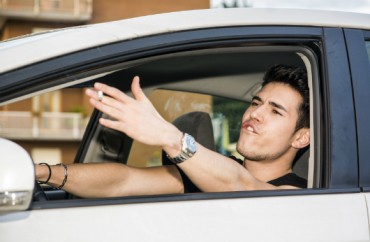 In August 2018, an upstate New York motorist was trying to merge on to a highway when a white Ford Transit with State University of NewYork-Binghamton license plates allegedly “aggressively prevented” the motorist from merging. The motorist slammed on their car’s brakes, let the van go ahead, switched to another lane, and passed the Ford.

“I saw a hand with a middle finger through the side window,” the motorist reported. “I took a second look and the person left it there and was shaking their head and saying something that could not be made out.”

The motorist then followed the white Ford to local Wilson hospital, waited for the aggressive driver to leave the van, then wrote down the vehicle info.

The report, obtained through an open records request by The College Fix, was filed through SUNY-Binghamton’s “Hate or Bias” incident reporting system, where students, faculty — and apparently local citizens as well — can make anonymous accusations against other members of the campus community through the university’s Multicultural Resource Center.

Documents obtained by The Fix show four reports were filed during the fall 2018 semester. According to the center’s website, “All reports are viewed by the Chief Diversity Officer and University President.”

As the incident reports released by SUNY-Binghamton have names redacted, it is unclear how the four cases were settled. Numerous attempts by The Fix to contact both SUNY-Binghamton administration and the Multicultural Resource Center for this story went unanswered. The incident reporting system website does not address what type of repercussions are faced by those who are reported.

Another report filed last fall simply stated the “Department chair of the SSIE department does race discrimination while giving funding to student [sic].” SUNY-Binghamton Systems Science and Industrial Engineering Department Chair Mohammad Khasawneh did not respond to an email request for comment.

It seems professors are often fair game on the “Hate or Bias” tipline, as evidenced by a report of an incident that occurred last August in the Old Johnson building on campus.

During an early afternoon class, a student-athlete approached a professor to have a sheet of paper signed for the athletic department. The professor allegedly recognized the student right away, saying “Oh yeah, the minorities are always easiest to remember.” The student-athlete conceded in the report that he or she is the only minority in a class of 15 people. The professor was then reported to the “Hate or Bias” website.

The fourth report stems from last September, when a male SUNY-Binghamton student visited an academic advisor with his mother in tow. The two needed to talk to the advisor about dropping a class called “Rome’s Augustan ‘rebirth,’” as the student was finding the course work and amount of writing to be too challenging.

After nearly 40 minutes of discussing the student’s alternative options, the advisor noticed he was growing impatient and losing interest. He began swinging his arm, tapping his mother in the ribs and on the leg. She moved her chair away from him, then moved closer to her. The mother said something to her son in their native language and he stopped. At one point, the student grabbed a pen from his mother and began swinging his arm “as if to poke/stick” his mother.

“Through out [sic] this entire time his mother only acknowledged his behavior once in the 1 hour and 10 minute appointment,” the advisor said.

Even though the mother’s interaction with her restless son took place in a private meeting between parent and child, the advisor reported the meeting to SUNY-Binghamton administration.

“My concern was that the mother let this behavior happen,” the advisor said in the report, adding “that the physical hits had enough force that I was able to audibly hear the punch when they landed.”

“Although I do not believe the intention was to violently harm his mother, the fact that the student felt like this was acceptable behavior and that he was indeed causing physical harm concerns me, regardless of intention,” the advisor reported.