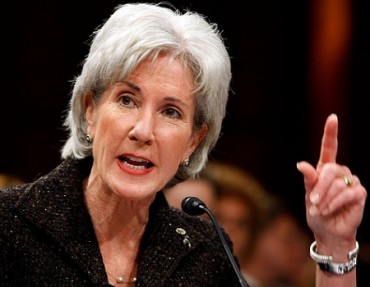 Sebelius was a central force behind the 2010 health care law. Moreover, she was the author of the law’s controversial mandate that forces employers–including religious institutions–to provide workers with contraception coverage, regardless of the Church’s moral objection. The matter escalated into fierce dispute when Catholic employers and clergymen fought back, claiming the requirement was a direct assault on religious liberty.

“[DeGioia] does not address the real issue for concern — the selection of a featured speaker whose actions as a public official present the most direct challenge to religious liberty in recent history,” he said.

Despite this statement and a petition to rescind Sebelius’s invitation circulated by the Cardinal Newman Society, DeGioia stood by the university’s decision.

“The Secretary’s presence on our campus should not be viewed as an endorsement of her views,” he said. “As a Catholic and Jesuit University, Georgetown disassociates itself from any positions that are in conflict with traditional church teachings.”

However, leaders of the Cardinal Newman Society, a think tank dedicated to the renewal of Catholic higher education, said the invitation disregarded Georgetown’s religious identity, according to an official statement from the organization.

“It is scandalous and outrageous that America’s oldest Catholic and Jesuit university has elected to provide this prestigious platform to a publicly “pro-choice” Catholic who is most responsible for the Obama administration’s effort to restrict the Constitution’s first freedom—the right to free exercise of religion,” said the statement.

In her speech, Sebelius quoted President John F. Kennedy and stressed the importance of the separation of church and state, calling it “a fundamental principle in our unique democracy.” She lamented that, even decades after Kennedy’s speech on the issue, the debate was still brewing.

Sebelius pulled rather selectively from Kennedy’s words, and leaned on him throughout the speech as if he were the ultimate authority on the separation of church and state. Specifically, she cited his belief in an America “where no religious body seeks to impose its will directly or indirectly upon the general populace or the public acts of its officials – and where religious liberty is so indivisible that an act against one church is treated as an act against us all.”

The Secretary, however, failed to relay Kennedy’s following words in that same speech, “I would not look with favor upon a president working to subvert the First Amendment’s guarantees of religious liberty.”

In the past few months, many Catholic officials have contended that those words are in direct contrast with the language found in Sebelius’s own authored mandate.

This question on its own demands a much larger space for discussion. However, one must examine the parallels between Sebellius’s careful, selective rhetoric and the administration’s deceptive stance on religious liberty.

This mandate and subsequent disregard for Catholic concerns by the Obama administration are indicators of a prolonged trend: A federal government that guards the state from religious encroachment, with no concern for the alternative. Sebelius’s address makes conflict between religion and state a one-way street.

Sebelius’s narrow approach to the topic is further proof that the establishment clause of the First Amendment is merely an inconvenient guideline for today’s politicians. But until Sebelius and her allies recognize the distinctly binary characteristics of the freedom of religion, their outspoken support of the separation of church and state will continue to be hypocritical.

“The contrast is stark between Georgetown University and those faithful Catholic colleges and universities that have stood for faith and freedom.”

Fix Contributor Elaina Plott is a sophomore at Yale University.