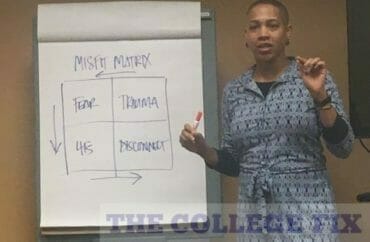 College students told being black, an immigrant or a refugee is ‘traumatic’

The event, “Managing the Trauma of Race,” sought to mitigate the trauma the African American community faces from individual, systemic and institutional racism, according to organizers.

The school’s Multicultural Center website states that black Americans are “bombarded” with racism and that it “leads individuals to experience trauma on a daily basis.”

Among attendees were approximately 35 students, members from the NAACP Chapter at Ohio State, and Kim Brazwell, a social justice advocate, writer and consultant.

Brazwell, who led the workshop, has worked for 13 years as an advocate for “equity and inclusion, experimental learning, engagement management, mission integration and process improvement efforts,” according to her LinkedIn profile.

At the beginning of the event, held last Wednesday, Brazwell asked attendees what came to mind when they heard the word “trauma.” Among the answers were PTSD, exhaustion, apprehensiveness, profiling, stereotypes, bullying, and fear, according to a College Fix reporter who attended the event.

Brazwell went on to outline her “Misfit Matrix,” which consists of trauma, fear, the 4 Fs — fight, flight, fawn and freeze — and disconnect.

She defined trauma as a “deeply distressing experience.” The trauma could’ve been tied to race, ability, class or nationality. The trauma then boils over to fear which she described as “surviving the trauma.” She cautions that although someone may have survived the trauma, they become hypervigilant to things that remind them of the trauma they went through.

Next, Brazwell’s 4 Fs — fight, flight, fawn and freeze — were defined as psychological behavior changes as a result of the trauma. She also stated that as a result of the behavioral change, there is a feeling of disconnect from parts of their personal or professional life. This disconnect has detrimental implications on their life. She says that this matrix will continue until the trauma is addressed.

She is also the author of “Browning Pleasantville,” a book that which is about “predominantly white institution’s reaction to the ‘browning’ of its attitudes, interests, and motives toward the diverse groups of people within its care-including its newly hired administrator who must decide whether to remain an activist or become a ‘token’ within an unchanged community,” according to the book’s online description.

Each chapter in the nonfiction book addresses different microaggressions Brazwell has faced and how she dealt with them.

One of her self-proclaimed strengths is “translation between various identities and power levels for more culturally responsive systems,” according to her LinkedIn page.