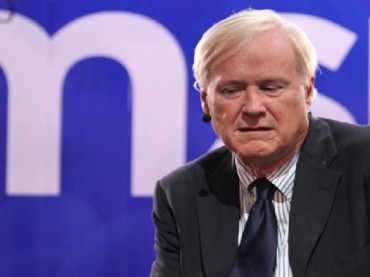 COLUMBUS – When Ohio State University graduating senior Mark Green checked online recently to see who’d been tapped as the guest speaker at his upcoming commencement ceremony, he said he was disappointed to learn it was the notoriously liberal pundit Chris Matthews.

“I saw it was him and I was like, ‘Why are they doing this?'” Green, a 26-year-old U.S. Marine Corps veteran who is earning his psychology degree, said in an interview with The College Fix. “I wouldn’t mind if it was a sitting politician, even if it was a liberal. But I don’t want to sit through a political commentator’s speech that I don’t agree with.”

Green is not alone. A lot of students have voiced disappointment over the selection of the MSNBC Hardball anchor as this May’s commencement speaker, a man who frequently bashes Republicans, has made comments suggesting people who oppose the Affordable Care Act are bigots and that those who scrutinize President Obama are racists, and who was brought to hysterics when Obama lost a presidential debate to Romney in 2012. There was so much discontent, in fact, that it came to light there was no student input in the selection process this year – a situation blamed on a current leadership change underway the university. As an olive branch of sorts, administrators promised to ensure there’s student representatives on the commencement speaker committee from now on.

But the damage has been done, at least for the May 4 ceremony, at which an estimated 10,000 students are expected to graduate.

“I personally wish they had gone with someone politically neutral,” Ohio State junior Miranda Onnen said in an email to The College Fix. “Two years ago we had Speaker Boehner, and last year we had President Obama. Though both highly partisan, they are politicians of eminence, and a good choice by the university.”

“Matthews once had a job in politics, but now is a partisan pundit for a living,” adds Onnen, vice-chair of the campus College Republicans. “I’ve heard from many people, and not just conservatives, about their disappointment in this selection. I’m not a graduating senior, but I will be graduating next year. I can only hope that the selection will be less polarizing.”

Indeed, it appears plenty of students of all stripes are not thrilled with the pick.

When the campus newspaper The Lantern broke the news about the selection in mid-March, the article prompted 55 comments, many of which expressed angry sentiments about the choice, such as “a good reason to have diploma mailed” and “what a mistake OSU – tell me it isn’t true!”

Graduating senior Jake Bradley then wrote a letter to the editor stating “I am deeply disappointed in OSU for selecting Chris Matthews as the commencement speaker for my graduation. It is not because he is a hard line liberal, but rather because he is directly against open dialogue.”

In an interview with The College Fix, 21-year-old Cody Rizzuto, a University of Cincinnati student who represents conservative students across the state as vice-chair of the Ohio College Republican Federation, said the Matthews selection is a disservice to all students.

“To have someone who is that partisan … who has made a career out of pitting one part of the country against the other, is not who you want as a graduation speaker,” he said. “He is a talking head who makes points for the left.”