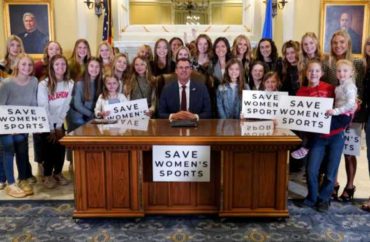 Documentation is required by ‘Save Women’s Sports Act,’ recently signed into law

Oklahoma public schools from kindergarten through college will now require all students to show proof of “biological sex at birth” in order to complete in school sports, NBC reported.

Oklahoma Governor Kevin Stitt signed a bill March 30, the “Save Women’s Sports Act,” that requires athletes to compete based on biological sex, the news outlet reported. The law “requires certain athletic teams to be designated based on biological sex” and “require[s] execution of an affidavit” to qualify for the team.

The Oklahoma law mandated that student-athletes 17 and younger must present the affidavit signed by a parent or legal guardian, prior to the beginning of the academic year, according to the Washington Examiner. Athletes 18 and older must also sign a similar affidavit while also providing “any change in the status of the biological sex of the student” within 30 days.

The state distributed the affidavits in July, but they gained notoriety after Erin Matson, executive director of abortion rights action group Reproaction, shared a photo of the document on Twitter, according to the conservative news outlet.

“This has nothing to do with encouraging girls to be athletes,” Manson wrote in the tweet. “This is totalitarianism. It is the white nationalist agenda. The anti-LGBTQ agenda. The anti-abortion agenda. It is all the same agenda.”

Do you understand what is happening?

This has nothing to do with encouraging girls to be athletes.

This is real. Shared with permission. pic.twitter.com/CGZ1SN5jr2

Woodall Schools Superintendent Ginger Knight confirmed that state law requires the district to have students complete the form to participate in athletics, according to NBC.

Eighteen states have enacted bills restricting sports by sex, NBC reported. Oklahoma is currently the only state that requires an affidavit to attest to a student’s sex. The law stipulates that a new affidavit must be completed before the start of the school year.