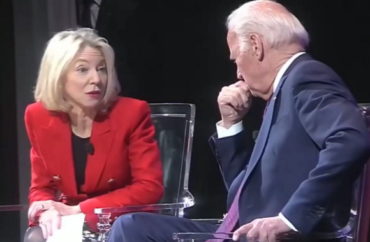 The president of the University of Pennsylvania is poised to become U.S. Ambassador to Germany after paying then-Vice President Joe Biden $900,000 for a job at the Ivy League school that required no regular classes and up to 12 appearances on campus.

Penn President Amy Gutmann will likely be announced as Biden’s pick for the prime ambassadorship, raising questions about whether the slot is payback for the lucrative position Biden held at Penn after leaving the vice president’s office in 2017, according to news reports.

Upon accepting the offer, Biden became the Benjamin Franklin Presidential Practice Professor, the first person to hold the position.

Biden collected $371,159 in 2017 and $540,484 in 2018 and early 2019 for a job with largely undefined duties. The agreement also required around a dozen appearances on campus, most of which were attended by wealthy donors paying top-dollar for tickets.

Biden left his position at the school in April 2019 to run for president.

Biden’s lucrative job came at the same time Democrats continued a national push to “cancel” student loans, arguing the cost of college had gotten out of hand and students were saddled with enormous debt. In 2012, Biden himself blamed professor salaries, in part, for driving the “skyrocketing” cost of college.

In April of this year, Biden asked Education Secretary Miguel Cardona to draft a memo explaining whether he had the authority to cancel $50,000 in loans through executive order.

According to LendEDU, students in the Commonwealth of Pennsylvania pay the third most in the nation in student loans. In 2017, professors at the University of Pennsylvania were the seventh-highest paid in the nation, averaging $217,300 per year — still well below Biden’s salary as an employee of the school.

While with the school, Penn created the Biden Center for Diplomacy and Global Engagement, a Washington D.C.-based policy center. Until 2019, the Biden Center was run by Antony Blinken, Biden’s eventual Secretary of State pick.

A Penn spokesman did not respond to a request for comment by The College Fix for this story.

Gutmann, who has no professional experience in Germany, has been a controversial figure on the Penn campus since taking over as president in 2004.

During her tenure at Penn, Gutmann made news when she declared the school a sanctuary campus for illegal immigrants. She angered campus police when she participated in a “die-in” to protest the death of black Ferguson, Missouri teenager Michael Brown at the hands of a white officer.

During the pandemic, Gutmann, the highest-paid Ivy League president, refused to take a pay cut. The presidents of Harvard University, Dartmouth College, Brown University, and Cornell University all took pay cuts of 20 percent or more. In 2017, Gutmann made $3.6 million in salary.

After Biden’s election in 2020, local media speculated Gutmann could be up for a role in the Biden Administration, with many believing she could be named Secretary of Education. That position instead went to Cardona.

If appointed, Gutmann is subject to confirmation by the U.S. Senate.