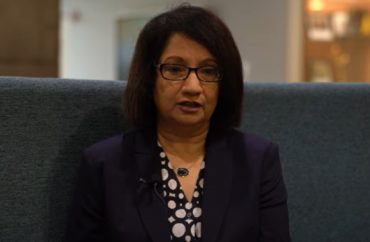 Will fold plans into myriad of other diversity initiatives

Pennsylvania State University officials announced that a racial justice center will be no more, though the initiative’s goals will be folded into the ongoing woke agenda of the school.

The center received the ax at the same time the Big Ten university faces a $127 million budget shortfall. Rumors of the abandonment of the center began several weeks prior after a letter from faculty on the search committee for the executive director leaked to the media.

Penn State’s president, Neeli Bendapudi, confirmed the decision on October 26 in a message to the university community. Her announcement comes soon after she oversaw the cancelation of comedians Gavin McInnes and Alex Stein, who she (pictured) previously condemned while making a faint appeal to free speech. Her predecessor promised the center.

“Penn State is beginning a new process this fall to evaluate the multitude of diversity, equity, inclusion and belonging (DEIB) initiatives, programs and scholarly research underway across the 24 campuses of the University,” a university news release stated.

President Bendapudi said in the statement:

Scholarship and research on racism and racial bias play an integral role in not only attracting and retaining faculty who are leaders on this topic, but also on combatting bias and hatred within our communities, the nation and world. There is so much potential at Penn State for us to expand, connect and invest in the work of our faculty experts and existing networks in a way that grows our impact and standing as an institution in this scholarly discipline.

The university promised that “financial investment in existing DEIB initiatives across Penn State will be at least as much as would have been committed to the Center for Racial Justice over the next five years.”

“Among existing areas leading scholarship in racism and racial bias at Penn State are the Center for Education and Civil Rights, the Rock Ethics Institute and the Africana Research Center,” the news release stated.

Penn State Dickinson Law “recently launched the Antiracist Development Institute,” the news release noted. Its goal is to work with ” businesses and organizations across the country to implement best practices to actively combat racism, intolerance and racial bias at a national level.”

One thing the university will not be allocating resources to is a basic training on free speech. It allowed radical student activists to employ the Heckler’s Veto to cancel an event with right-leaning comedians Gavin McInnes and Alex Stein last week.

The cancellation came after President Bendapudi denounced the speakers. In the cancelation message, the president said the university “support[s] the fundamental constitutional right of free speech and free expression of all members of our community.” She boasted that the “administration firmly denounced the two speakers.”

Bendapudi blamed Stein, who regularly enters into the middle of protests to ask questions and engage with protesters, for the violence and for the ultimate cancelation.

“It is my understanding that Alex Stein (co-host with Proud Boys founder Gavin McInnes) entered the peaceful protest and this action raised the tension,” she wrote.