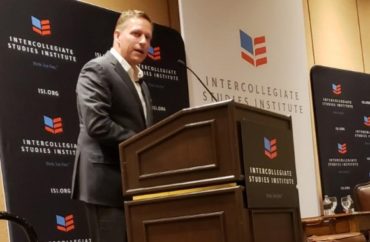 Standing before a room full of nearly 100 right-of-center student journalists on Friday night, he told the crowd “we are not on the losing side of history.”

But a “reformation” needs to happen first, the billionaire tech mogul and libertarian philanthropist said.

“Universities today are as corrupt as the Catholic Church of 500 years ago,” Thiel said.

During his speech, he spoke of an academia that has shut down debate, excommunicated conservative scholars, and insisted a college degree is the only way to “salvation,” that being a good job and solid future.

“The reformation is going to happen,” Thiel added, noting it won’t come from within, but from the “outside.”

Thiel made the comments in a keynote speech at the Intercollegiate Studies Institute’s Collegiate Network editors’ conference. The group funds independent and conservative-minded campus news outlets at universities across the nation, and Thiel is an alumnus of the 39-year-old nonprofit, founding the Stanford Review in the late 1980s.

Thiel is no stranger to criticism of higher education. He’s famous for his program that has students skip college or drop out to follow their entrepreneurial dreams with a grant.

“The Thiel Fellowship gives $100,000 to young people who want to build new things instead of sitting in a classroom,” the program’s website states.

In his speech, Thiel told the college journalists that the greatest political problem today is the “narrowing of debate.” As it relates to college campuses, he pointed out that the vast majority of scholars only think “one way.”

“At some point, if it’s 100 to zero, you start to suspect you’re in North Korea,” he said. He pushed back against that “madness of the crowd.”

“Does the unanimity mean you’ve gotten to the truth, or does it mean you’re in a totalitarian state,” Thiel said.

“We have this illusion that all sorts of important decisions have been decided,” he said, encouraging the students not to accept that narrative.

“The idea that we are on the losing side is a form of psychological warfare,” Thiel said.

In reality, higher education is in trouble, he said, citing the ballooning student debt crisis, the lack of instruction that translates into marketable skills, and the fact that even though universities have seemingly endless resources — “they’re not delivering in any way.”