A petition at Georgetown University signed by hundreds of students and faculty demands that administrators establish “a set of transparent accountability criteria” before letting former Trump administration officials become guest professors or give speeches on campus in 2021.

Historically, Georgetown hires former White House staff or hosts outgoing leaders for events, but the petition argues many members of the Trump administration should not be included in that tradition.

The standards would be developed “in consultation with faculty and students” and likely limit or block the presence of former Trump officials on campus.

The petition states that Trump officials who have “acquitted themselves with honor and dignity” could be allowed on campus.

“Many, however, have not,” the petition adds, “and therefore we should not permit them to use Georgetown University to legitimate their shocking records of service, rehabilitate their soiled reputations, and rescue their damaged careers.”

Georgetown officials did not respond to an emailed request for comment from The College Fix about their reaction to the petition. 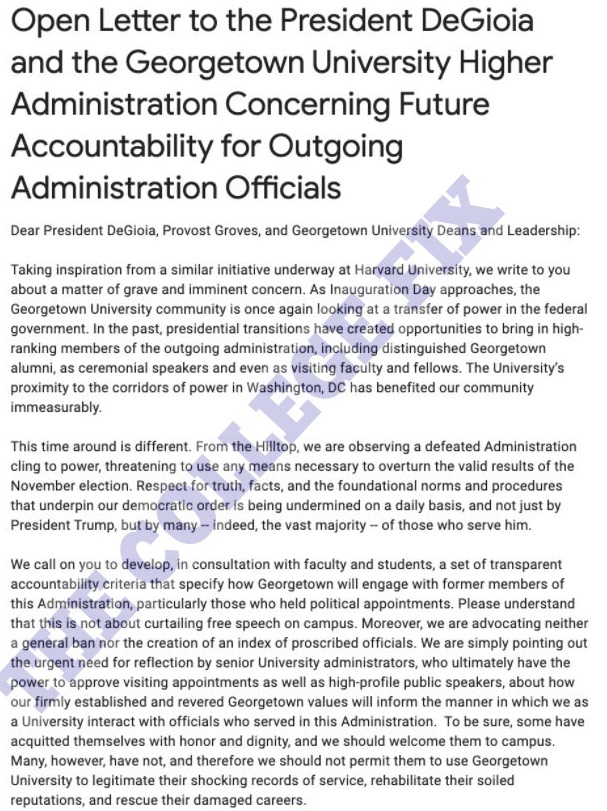 The petition was penned by faculty in the Georgetown University School of Foreign Service at the school and published Nov. 23, The Hoya student newspaper reports.

The authors at Georgetown cited inspiration from another petition at Harvard, which also demands “accountability guidelines” when considering inviting Trump administration officials to speak.

The Georgetown letter states that “Respect for truth, facts, and the foundational norms and procedures that underpin our democratic order is being undermined on a daily basis, and not just by President Trump, but by many — indeed, the vast majority — of those who serve him.”

In a similar petition in 2018, the Georgetown community called for the resignation of fellow alumnus Kirstjen Nielsen amid outrage from the child separation policy during her tenure as Trump’s Secretary of Homeland Security.

Ultimately Nielsen resigned, though over a year later and not in response to the petition.