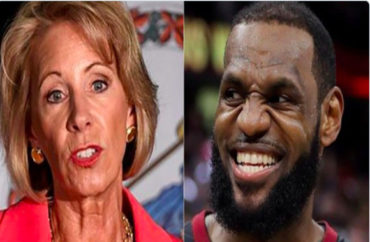 An online petition to replace Betsy DeVos* as head of the federal Department of Education is currently well within reach of its 40,000 signature goal.

The petition says James is a “highly respected and extremely influential community advocate and activist who recently opened a state-of-the-art public school for at-risk children,” while Secretary DeVos is “a scandal-ridden Republican donor who shows an inexcusable dislike for public education, wants to gut protections for women and minorities, and has advocated for teachers to be armed in schools.”

Petition originator Rebecca Gerber told USA Today that she was “very excited by the overwhelmingly positive reception” to the petition, but wasn’t surprised as James is a “singular role model” and “a superstar activist.”

In the petition Gerber writes that DeVos was confirmed as Secretary of Education “without ever setting foot in a public school.” There’s no proof of this; even the head of the Washington DC teachers’ union, who made the same claim early last year, qualified her statement with “according to what I’ve heard.” Not to mention, it’s difficult to imagine that, as big an advocate DeVos was (and is) for charter schools, that she never visited one. (And yes, charter schools are public schools.)

Gerber said she hopes the petition can “send a message” and claimed that people were frustrated with Trump’s alleged “petty, racist attacks against James and other black athletes.”

DeVos is one of the most criticized members of the Trump administration. She assumed office as secretary of education in February 2017.

Last month, vandals untied a $40 million yacht owned by DeVos’ family, setting it adrift at a boat club in Huron, Ohio, resulting in thousands of dollars in damage.

Unfortunately for Gerber, James signed a four-year contract with the Lakers over the summer. He also has a busy year in Hollywood coming up as he is set to be producing several TV series and “Space Jam 2.”

At press time, the petition is about 4,500 signatures from its goal.