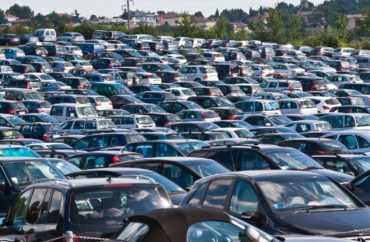 Faculty and staff at the University of Pittsburgh have reportedly waited 10 years or longer to get a parking permit.

Some professors even earned tenure in less time than it took them to get a permit to park on campus.

Helen Jarosz, an administrative assistant at Barco Law Library, stayed on Pitt’s parking services waitlist for 13 years before she received her parking spot in 2017.
“I’ve worked at Pitt for 38 years,” Jarosz said. “If there’s one lesson I’ve learned working here, it’s that Pitt works on its own timeline.”

…However, some professors claim they got tenure before a parking spot. Jarosz applied for a parking spot in March 2004 so she could easily get home to take care of her mother in Lawrenceville, who relies on her in case of emergency. During Jarosz’s 13-year long wait, she took a bus to campus, carpooled and often parked at Panther Hollow — a parking lot that is now a transportation corridor.

There are currently 4,300 parking spots on campus. While not every individual drives to campus, there are more than 30,000 students plus another 5,000 professors and staff at Pitt.

That works out to about one parking spot for every eight people.

The university encouraged people to consider “eco-friendly alternate modes of transportation, including carpooling and vanpooling,” according to the campus newspaper.

School officials are also working with consultants to identify other potential parking locations.

The issue has hurt recruitment of new hires, according to psychology professor Marc Coutanche.

“Understandably, [applicants] ask how you get to work — and we tell them the truth,” Coutanche said, according to the campus newspaper. “They get the information that, unless you want to spend a lot on leasing a spot, you have to be okay with taking the bus or walking or cycling in a somewhat unsafe environment.”