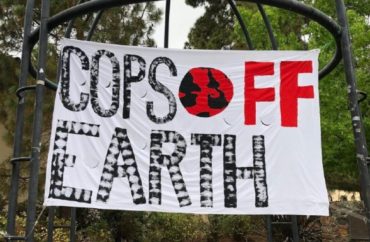 Abolish Stanford said the university report affirms that the campus police force is a ‘racist, classist institution that targets people of color’

Stanford University officials recently released a report that delved into the problems and benefits of its police force.

But an anti-police group called Abolish Stanford still is not pleased with the report’s recommendations on reforms — its members wanted a complete abolition of the police force and nothing less. The report called for  a reduction in the use of armed Stanford University Department of Public Safety officers.

The public safety community board’s report affirms, according to Abolish Stanford, that the police force “is a racist, classist institution that targets people of color, criminalizes and exacerbates mental illness and poverty and protects private property at the cost of community safety and wellbeing.”

The anti-police group explained in an opinion piece in The Stanford Daily that “the University was completely unresponsive to the widespread concerns that [campus police department] is a perpetrator of violence.”

The group sent The College Fix a link to its essay in the campus paper in response to questions about if it agreed with the report’s conclusions.

University officials did call for disarming the campus police force as much as possible.

“Armed policing, particularly of student-centered areas of the community, should be reduced to the greatest extent possible,” the first principle of the report said. Furthermore, “armed policing should be used to the lowest extent appropriate for the circumstances.”

Laura Wilson, director of the department of public safety, told The Fix via email that her officers will “continue to embrace recommendations” in order to help people “be safe and feel safe.”

Racial disparities in stop are not clear cases of racism, committee says

While anyone exercising a law enforcement role on campus may need to take anti-bias training, the private California university’s own data does not clearly point to racism among its police force.

Latino drivers “constitute a considerably higher portion of arrests and citations in this data set than their proportion of the overall Stanford faculty, staff and student population,” the report said. Campus officials need “additional data and analyses to better understand this disparity.”

Black drivers and bikers, while pulled over more frequently than their share of the campus population would suggest, often did not receive a citation when pulled over by SUDPS.

“Compared to other groups, officers gave only a little more than one-third as many citations to Black operators as compared to stopped operators from other groups,” the committee said. “At this point, we simply do not have the evidence needed to sort between [explanations].”

Furthermore, the citations given by the public safety department roughly reflected the demographics of the campus and the surrounding counties.

“Across the most common SUDPS citations given over this period, racial and ethnic distributions were generally similar to the overall racial/ethnic demographics of Stanford affiliated groups,” the report said.

The university will continue to look into the recommendations.

“Stanford will assess how the Board’s recommendations can be implemented operationally,” university spokesperson Dee Mostofi told The College Fix via email. “This process will be scoped over the next few weeks, and the fuller design process will occur over the next year.”