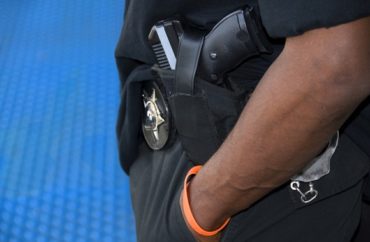 In the midst of a pandemic isolating students across the nation and campus resources shut down to all but a few, the student government appears to have formed a group with the stated purpose to “abolish” the campus police department, whose officers do not carry firearms.

“Are you interested in learning more about abolition and how that can look at Georgetown? Abolition is the future & we would love all hands on deck,” it adds.

Lacking any documented instances of police brutality on campus, GUPD has still been the target of constant student activist harassment from repeated “climate surveys” to student oversight boards.

GUPD’s clean track record is understandable because their officers have been unarmed for years.

Despite this, a petition last summer demanding Georgetown cut ties with all police departments (the university repeatedly contracts with the nearby Metropolitan Police Department) gained over 8,000 signatures in mere days.

The petition was moderately successful, resulting in a GUSA effort calling for the reduction of university contracts with police.

The current GUSA initiative is ambitious, but not unheard of. The Minneapolis City Council in June 2020 announced its plan to abolish the police department in their town following the death of George Floyd in the custody of two Minneapolis police officers. Others followed suit.

The GUSA abolition working group, oversight board, and climate surveys were joined this school year by a related initiative called Black Lives Matter Tuesdays each week as part of the GUSA Student Activism division.

The success of the abolition push largely depends on the participation of the Georgetown administration.

Georgetown’s Office of the President and the Office of Communications did not reply to a request for comment by The College Fix.

The current GUSA President’s Office and the student point of contact for the abolition working group also did not reply to requests for comment.