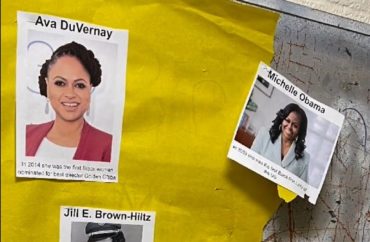 Spokesperson says it is being investigated as ‘malicious destruction of property’

A black residential advisor at the University of Michigan said he is the victim of a racist attack after two bulletin boards he created were vandalized.

But the Big Ten university’s police department told The College Fix that it does not have reason yet to believe the attack is due to Solomon Lucy’s race.

“There is currently no evidence to support that it is racially motivated, it is currently listed as a malicious destruction of property,” police spokesperson Melissa Overton stated in an email on April 19. “This case was submitted to the Washtenaw County Prosecutor’s Office and there are no current updates,” Overton said on April 26.

She said the police report cannot be released yet because the investigation remains ongoing.

She also declined to provide details on security cameras that could have captured the incident. “Our residence halls do have security cameras, however we do not release the specific locations of them,” Overton told The Fix last week.

Lucy, a graduating senior and resident advisor, posted an Instagram video on April 9 that showed vandalism of two bulletin boards he had posted in his hall. He is also the Black Student Union’s education and research chair.

Lucy said he noticed the vandalism the previous night when he had returned at 3 a.m. One display featured information about Lucy and another celebrated Women’s History Month and included photos of prominent black women, such as Michelle Obama and Condoleeza Rice.

In the video, Lucy showed both boards, which had been ripped and scribbled on by someone. He also said the vandalism was “obviously deliberate.”

“This past weekend i was [sic] on the receiving end of a hate crime and I am determined to bring awareness to this,” he wrote on Instagram. “No Black RA, student, faculty member, etc should EVER feel unsafe and targeted on this campus.”

“Although this truly breaks my heart, I am DETERMINED to bring more awareness to the situation & fight for change for the betterment of future Black wolverines & Black RAs to come,” Lucy wrote.

He said these signs were torn down less than 12 hours later. “THIS IS RACIALLY TARGETED!!!!” he wrote in all-caps on Twitter.

My signs weren’t up even for 12 hours before they were torn down. If it wasn’t clear before it’s clear now, THIS IS RACIALLY TARGETED!!!! pic.twitter.com/WH8j9kcWUD

Solomon did not respond to two requests for comment from The College Fix sent in the past two weeks.

The Fix reached out via Instagram and Lucy’s school email and asked for a copy of the police report he filed, an update on the investigation, how he knew the incident was deliberate or what consequences for the perpetrator should look like.

Following the vandalism, students and faculty shared support for Lucy.

Rebekah Modrak, an art and design professor at the University of Michigan, told the Michigan Daily that she printed out 400 copies of pictures of Lucy’s bulletin board, and at least 264 copies were hung on the doors of faculty members in support of the student

“We hope this sends a clear message that Black voices on this campus will not be silenced, and instead will be amplified,” Modrak told the Michigan Daily.

“We’re disgusted and angry by the racist vandalism” Modrak told the campus newspaper.

She said she hopes that “reproducing Solomon’s bulletins across campus brings attention to what’s happening and puts some pressure on the administration to investigate and take hate crimes seriously.”

Modrak did not respond to two requests for comment from The College Fix sent in the past two weeks about the frequency of similar vandalism incidents and about potential consequences for the perpetrator.