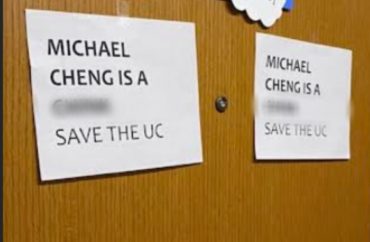 The Harvard Police Department has closed its investigation into racist notes left on the student government president’s dorm room door. It will not say if it has a suspect or not.

“The investigation is closed,” Harvard University Police Department spokesperson Steven Catalano told The Harvard Crimson. “It was closed at the conclusion of the investigation,” he told the campus newspaper.

The paper reported that Catalano would not say if a suspect had been identified.

Michael Cheng, the recent president of the Harvard Undergraduate Council, alleged in February that someone left several notes (pictured) for him on his door that said “Michael Cheng is a ch**k. Save the UC.”

Cheng resigned on Tuesday after successfully convincing students to dissolve the current UC and create a new legislative body.

Catalano and HUPD Chief Victory Clay did not provide comments in response to Fix media inquiries. The Ivy League university’s media relations team did not respond to questions about the investigation.

The Fix asked Cheng what steps were taken to investigate the incident but he did not return two emailed requests for comment sent in the past week.

He previously told The Fix he could not comment on the investigation while it was ongoing.

Cheng previously alleged that someone in the Undergraduate Council left the notes and he rejected a statement of solidarity in February.

“The person or people that are responsible for yesterday’s hateful attack, as well as the multiple kinds of other attacks targeting me, are potentially in this room right now,” the UC president said at the February 15 meeting.

“We’re now supposed to take seriously that the Undergraduate Council is offended by anti-Asian racism, with many of its members engaged in a multi-month harassment campaign that was influenced by anti-Asian stereotypes,” Cheng told The Crimson the following day.

He and his vice president, Emmett de Kanter, recently apologized to black activists for using the words “defund” and “abolish” in their campaign in 2021.

“These are words that have been used, and continue to be used, by organizers, especially black organizers, fighting for their lives and lives of those they care about,” de Kanter said in a video posted by the pair.

Cheng and de Kanter ran on a platform of restructuring the current student government. The pair alleged corruption and misconduct by UC members, though an audit has yet to uncover any problems.