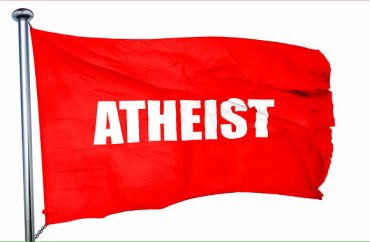 And his reputation now lies in tatters because Facebook misreported where he works.

Carrier is on the receiving end of a growing sexual-harassment inquiry by a national student atheist organization that has featured him as a campus speaker.

Yet he continued speaking to Secular Student Alliance chapters at numerous universities over the past year, even while the national office was “fully aware” that he had harassed students, according to his accuser, who stayed quiet more than a year before going public earlier this month.

As a result, Carrier has been banned from a prominent atheist conference and even from writing on his own blog. He told The College Fix he would commence legal action in the next two weeks to clear his name – but not necessarily against his primary accuser.

‘I’m not even close to being his only victim’

A freelance lecturer, book author and leading scholar behind the “Christ myth” theory that a historical Jesus Christ never existed, Carrier has long argued that atheists should embrace “Atheism+.”

Considered either a branch of or a cancer on the “New Atheism” pioneered by atheist heavyweights including evolutionary biologist Richard Dawkins, Atheism+ or “intersectional atheism” put a social-justice spin on the rejection of theism.

When rape accusations against Skeptic magazine editor Michael Shermer arose in 2013, Carrier was among the leading voices saying the alleged victims should be believed.

But Carrier also practices polyamory and has chafed against Secular Student Alliance rules that speakers not date students. Those behaviors appear to be at the heart of allegations against him, only the latest of which he has denied.

In a Facebook post June 15 that was removed right before this story’s publication, the former president of the Arizona State University chapter of the alliance, Amy Frank, said that Carrier “sexually harassed me and touched me a year ago after speaking at ASU.”

She broke her silence after receiving a Facebook notification that Carrier had started working at Camp Quest, an international “summer camp beyond belief” for nontheist children.

“I’m not even close to being his only victim, and there are even more victims of other speakers of the SSA,” Frank wrote, calling abuse “fairly common” at its events. She accused the alliance of “go[ing] out of their way to undermine the reports,” and said she would boycott it until its leadership is “completely dismantled.”

“I’ve held my tongue far too long,” Frank said. “The victims have had enough.”

In a statement posted to Facebook hours after Frank’s explosive allegations, the alliance acknowledged it had removed Carrier from its speakers list last year.

It was fuzzy on the reason why, but noted that its policies “explicitly forbid speakers from initiating any sexual conduct with SSA students.” It said a board-led investigation into the adequacy of its sexual-harassment reporting system and policies would also probe “our response to the incident [Frank’s allegation] when it was originally reported to us.”

In a subsequent post, the alliance said an outside consultant was taking over and expanding the investigation, and provided an email address for alleged harassment victims to contact the investigators directly.

The alliance said that no one “removed for cause” from its speakers list would be invited to speak at its annual convention, and it would inform students when speakers are removed.

You mentioned polyamory, not me

The curious thing is that Carrier has never been employed by Camp Quest. The organization wrote on Facebook the same day as Frank’s post that Carrier had volunteered as an “activity leader” several years ago but was never considered an employee.

In his first public response to Frank’s allegations, Carrier himself wrote that someone might have “recently labeled” him as a Camp Quest employee on Facebook, which then “generated the Facebook announcement” that triggered Frank. It was actually Frank who brought up polyamory in their one and only interaction at Arizona State in April 2015, Carrier wrote. (He said Frank went by a different name at the time.)

“Apart from publicly flattering her abilities as I would anyone as competent, we had one private conversation in which she expressed interest in opening her relationship” with the man she was seeing, “but noted he wasn’t sure about it yet,” Carrier wrote.

“I mentioned that if she ever does [open her relationship], I’d be interested in dating her, and she should feel free to contact me if that happens. She smiled and said she would.” If that’s sexual harassment it’s “quite a stretch,” Carrier said.

According to Carrier, after Frank reported this incident to the alliance weeks later, the SSA told Carrier that a complaint was filed alleging that he “made sexual advances toward a student after a recent event” who “felt that they had made clear that such advances were unwelcome and felt very uncomfortable.”

MORE: Prof fired for saying he wanted to ‘ride you hard’

Without being told who accused him, Carrier thought the alliance was referring to another woman he had expressed interest in at another event. He had deemed his behavior toward that woman as morally reprehensible, whereas his interaction with Frank was not “at all bad,” he wrote.

As a result he didn’t immediately defend himself from the allegations, telling the alliance he “thought the interest was mutual and I was very wrong” and wouldn’t do it again. Instead he offered to come clean about the encounter on his blog.

Only months later did Carrier learn that the complaint came from Frank, he said.

“I have not decided yet whether to sue Frank,” Carrier told The Fix in a followup email Thursday. “She appears to be troubled and may be a victim of mental illness.”

He is suing “a number of other parties who have made additional statements unrelated to the Frank accusation” unless they retract those statements, Carrier said.

Carrier is hoping the SSA investigation “will be enough to make clear” that Frank’s claims are false, but if not, he’ll include her in litigation “to establish a verdict on the record that her statements are false.”

Though the alliance washed its hands of Carrier, officials apparently made little effort to warn chapters that Carrier was suspected of anything. He has appeared at several universities as recently as May, including the Florida Institute of Technology.

In an update to his blog June 16, Carrier said he had learned Frank was disappointed that the SSA had not published her accusation.

The alliance’s first acknowledgment that its relationship with Carrier had changed didn’t come until this month, after Frank’s Facebook post.

MORE: Cussing by itself is not ‘sexual harassment’

That protocol may change, according to SSA spokesperson Patrick Barnacle.

“[W]e will hold ourselves accountable. We have a continuing duty to protect our students, and that includes sharing as much as we can,” Barnacle told The Fix.

Intersectional atheism is just “Atheism plus angry social justice activism based largely on third-wave feminism and intersectionality,” wrote another atheist author, James Lindsay, last week. “Given that, it is completely unsurprising that it would, without hesitation, feed upon one of its own [Carrier] and relish the chance at doing so.”

More about that cis-gendered male feminist/atheist who has been hoist on his own petard. https://t.co/HbOnByOFz8

‘Unrealistic’ to ask speakers not to sleep with students

Carrier’s pursuit of sexual freedom regardless of student status goes back to at least 2012. In a blog post, he called SSA’s policy prohibiting sexual behavior between students and SSA speakers “overbearing and unrealistic,” and said even that policy had wiggle room.

If he wanted to date students, Carrier wrote then, he’d “just withdraw from the SSA Speaker’s Bureau.”

He did exactly that within a month of the complaint’s April filing, according to Carrier, though the SSA told The Fix that Carrier resigned from its speakers bureau in August.

“The SSA is investigating everything, and that’s at my request,” Carrier said in an email to The Fix on Monday. “I am very encouraged by their willingness to do that, because no one else seems willing to properly investigate any claims against me before publishing them, or even after publishing them.”

He said he expected SSA’s report on Frank’s allegations to come out next week. The alliance declined to tell The Fix whether others were also being investigated.

Tired of his ‘boundary-pushing behavior’

God and Man at #Skepticon: Atheist @RichardCCarrier Gets Banned https://t.co/WJwaLUr5np

She cited his “repeated boundary-pushing behavior” as one reason the conference stopped inviting him as a speaker by 2014, after he had appeared at the first six Skepticons.

“[O]ur attendees’ well being and comfort is put at an unacceptable risk by Carrier’s presence, and so we are officially prohibiting Richard Carrier from attending any future Skepticons,” Lane said.

Freethought Blogs (FtB) says it stands “for feminism, against racism, for diversity, against inequity.”

“After a review of the evidence so far, Richard Carrier’s posting privileges have been suspended, pending further evaluation, and all comments on his blog have been closed,” Myers wrote.

In a statement clarifying the network’s relationship with Carrier, the newly formed FtB Ethics Committee said Carrier was not cooperating with the blog network’s own internal investigation.

Carrier “chose to leave the network” as the committee was reviewing “several reports” of his behavior, read the statement by five FtB contributors. The committee can’t complete a “thorough review” of allegations without his cooperation.

Carrier returned to his former blog to insist that “[a]ll the allegations made public against me this past week are in significant part false and constitute defamation,” and that he was “fully engaged in taking legal action now.”

“When stage one of that process is completed I will publish more about the truth of what is going on,” Carrier wrote on his blog on Thursday. “Which is substantially different from what you are being told.”

Carrier said he left the blog network because he believed its ethics committee was being unfairly pressured to complete its own concurrent investigation. The SSA’s investigation is the only one equipped with the resources to adequately investigate the claims, he said.

Barnacle told The Fix that the SSA was “not prepared” to answer specific questions on the nature of the expanded investigation, except to say it “demands thoroughness more than expediency.”

In a Facebook message, Frank declined to talk to The Fix, saying she was not ready to speak to the media.

UPDATE: Richard Carrier added more details about his litigation targets in a followup email to The Fix, which have been incorporated. The description of “intersectional atheism” has been modified to clarify it is not endorsed by the popularizers of “New Atheism.”

EDITOR’S NOTE: The author is a former student member of the Secular Student Alliance whose onstage interview at Skepticon was criticized by racial activists.