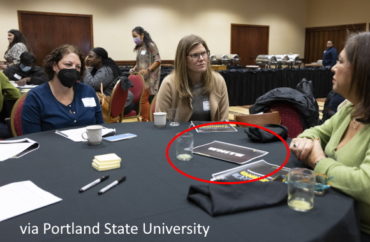 These are just some of the labels placed on tables at a recent Portland State University diversity, equity and inclusion summit that divided participants by identities to help facilitate various discussions, according to photos of the event.

According to a slide show from the event posted by the university, participants were instructed to “Please sit at the tables that most align with your salient identities. You are also welcome to self define multicultural and intersectional tables that extend beyond single definitions.”

Katy Swordfisk, media relations manager for Portland State, told The College Fix that the daylong gathering “built on a series of affinity convenings that took place earlier in the year.”

“Participants were invited to sit at a table that resonated with their identity (including Black, Latinx, White, Native American and Multicultural, as a few examples) for the first part of the day, and shifted to tables by discussion topic later in the day,” Swordfisk said via email.

The event was highlighted in a report released this week by the center-right Oregon Association of Scholars, which called the segregated tables “a clear example of neo-segregation and discriminatory public sector behavior.”

Portland State University Professor Bruce Gilley, president of the Oregon Association of Scholars, told The College Fix via email that the “use of ‘White’ tables at a university-run planning event is a gross affront not just to equality but to basic decency.”

“Portland State is taking the madness of the ‘diversity’ agenda to new heights by specifying a segregated place where a targeted group is to sit,” Gilley said. “Perhaps the university will roll out special arm-bands for white people on campus.”

The event was held Nov. 4 and called “The Future and Thriving of BIPOC Communities: A Time to Act Macroconvening.”

The macroconvening was billed as “a time to advance the work that has emerged from previous affinity summits and convenings. It will be a day of co-creation and mobilizing for action to ensure our thriving shared future.”

Numerous pictures posted of the event show that displays were placed on tables that stated in all caps: “WHITE,” “BLACK,” “NATIVE AMERICAN,” “LATINE,” “INTERSECTIONAL” and “PIAA,” which stands for Pacific Islander, Asian, Asian American. 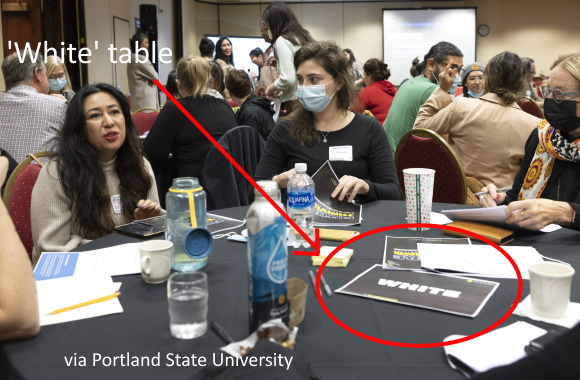 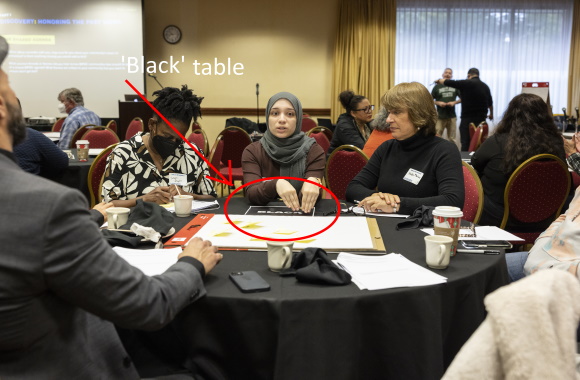 The Oregon Association of Scholars’ report argued “the purpose of white groups at such an event is so that white penitents can ‘identify and rectify hidden and unconscious forms of bias,’ ‘highlight White culture and define privilege,’ ‘acknowledge their own racist or oppressive attitudes,’ ‘talk about the experience of being White in a racially structured society,’ and discuss ‘privilege as bait that lures one into supporting the oppression of others.'”

“At the same time,” the report added, “they should avoid ‘imposing their own ideas and beliefs about what equity should look like, thereby reifying the very privilege they [are] attempting to disavow,’ which is ‘grounded in Eurocentric thought and habit.'”

“Thus, neo-segregation at Portland State has taken a sinister turn to include a new emphasis on white erasure by encouraging whites to disavow their European heritage. This white erasure is now institutionalized in the university’s self-description as a ‘majority BIPOC serving’ institution.”

The Oregon Association of Scholars report also takes Portland State to task for hosting on Nov. 2 a “Say Hey!” event, organized by the Portland-based nonprofit Partners in Diversity.

Honorees at the event “must be non-white,” and the association called it a “racially discriminatory community cocktail party which is estimated to have cost at least $20,000 and had no connection to the university’s research and teaching mission.”

The report argued it came at a time when Portland State is experiencing a “budgetary crisis, lagging performance, and growing evidence that campus radicalism is dissuading top students from attending.”

Swordfisk told The Fix the event was designed to “welcome professionals of color who are new to the area.”

“Portland State’s sponsorship of the event is part of the university’s continued commitment to advancing a culture of equity and inclusion where all of our students, staff and faculty can feel safe, belong and thrive,” Swordfisk said.