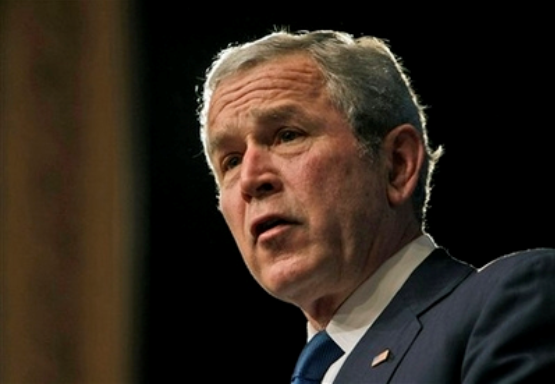 Former President George W. Bush on Thursday defended some of the cellphone data-gathering tactics used by the National Security Agency that have caused a public uproar in recent weeks, saying America’s “still at risk” and it’s about “connecting the dots” in the war on terror.

“There’s kind of a view that maybe they’ve gone away – they haven’t,” Bush said, referring to terrorists. “And now, techniques used to prevent attacks have been disclosed. I don’t know if you remember after 9/11, Congress had hearings, right? And you know what the hearings were about? We didn’t connect the dots. Well, we didn’t have the tools there to connect the dots.”

“One of the killers makes a phone call from San Diego to somewhere, how come you didn’t know? We didn’t have the tools. We’ve got the tools. Now the people in Congress are saying, ‘Why are you connecting the dots?’ It’s a tough assignment for the president. It is.”

Bush made the comments as part of a private, hour-long talk he gave during the annual general assembly meeting of the Western Riverside Council of Governments, which consists of representatives from city councils and public agencies in that region of Southern California – known as Republican-friendly territory.

The former president’s paid appearance was closed to the public and media.

The College Fix obtained an audio recording of the president’s address, during which he also spoke on the economy, immigration, Sept. 11, baseball and other topics in a dinnertime talk that was at times casual, at times serious.

Although Bush did not mention the Patriot Act by name, his comment that “techniques used to prevent attacks have been disclosed” was apparently in reference to recent revelations that the government collects American’s phone records and similar data for national security purposes.

Bush did not specifically address the news that, under President Barack Obama’s administration, government agencies have used the 11-year-old law to exponentially increase the amount of mass data collected on Americans, including emails, social media posts and similar information.

Bush also did not mention the data-mining program PRISM, which reportedly connects the dots between all the metadata collected by the government from companies such as Verizon and Google.

The disclosure about PRISM – made earlier this month by former NSA tech consultant and government whistleblower Edward Snowden – generated a firestorm of controversy, and prompted Americans to question whether they prefer freedom and privacy over a sense of safety.

Bush, in his talk, said Americans are “still at risk.”

Commenting on his thoughts the morning of the terrorist attacks of Sept. 11, 2001, Bush said “I vowed … I would do everything within the law to protect the United States of America, that is by far the most important job of the president.”

The Patriot Act was signed into law during the aftermath of the attacks, in October 2001.

“I’ve made a lot of tough decisions … but I hope my citizens understand that they are all designed to uphold the constitution and protect the American people,” Bush said. “People forget – there are a lot of threats. … Until free societies marginalize radicals, this nation is still at risk. We are in an ideological conflict, facing people who murder the innocent to advance their point of view.”

It was at this point Bush defended “connecting the dots” through clandestine technologies.

Bush also touched on the notion of democracy spreading across the globe, and America’s role in that movement.

“One of the things that really troubles me is isolationism,” he said. “I promise you, if the United States withdraws from the world, vacuums are created, and in the vacuums will flow elements that are not in the interest of human kind. We’re badly needed.”

Bush, who launched the war on terror in Iraq and Afghanistan in the aftermath of 9/11, spoke on what some people contend is the slow pace of democracy spreading in the Middle East as a result of American interventionism.

“People say, ‘Well, there’s no democracy yet.’ Well, you know what I understand about democracy? We enslaved Condi’s relatives for a hundred years,” he said, referring to Condoleezza Rice, a black woman who served as secretary of state for Bush.

“What are we talking about instituting democracy and fairness?” he said. “Democracy is a work in progress. It takes time. … We’ve gotta have some patience, some perseverance – and faith – that the democratic system is the only way for there to be peace in the long run. … I believe the Arab Spring is the beginnings of peace.”

CF1 from The College Fix on Vimeo.