Of the 62 recipients of a prestigious $30,000 federal scholarship granted in 2019, only three have worked for a Republican politician or a conservative organization, according to an analysis by The College Fix.

Conversely, 19 of this year’s Truman Scholarship winners – or 31 percent – have worked for either Democratic politicians or progressive organizations.

Among the personal issues pushed by the 2019 winners are “dismantling the prison industrial complex,” working to “uplift the voices of those most adversely impacted by environmental inequities,” advocating for racial reparations on campus, and achieving “climate justice.”

The prestigious Truman Scholarship is granted to college juniors to help them attend graduate school. The award is supposed to be nonpartisan, and recipients must pledge to serve three of their first seven years after graduation in public service.

The 2019 awardees were announced last Thursday. The Fix, in its analysis, also identified 12 students – or 19 percent of all recipients – whose political ideology was undetermined based on either their public biography or LinkedIn page.

The fact that the vast majority of receipts for an ostensibly nonpartisan federal award lean left this year are consistent with The Fix’s past analyses that found very similar results.

Of the 2018 Truman scholars, not one had identified as a conservative or Republican, while 36 percent had worked for a Democratic politician or organization, according to a College Fix analysis. Another 29 percent advocated for solidly liberal policy positions and 14 percent indicated moderately liberal interests.

In 2017, 43 percent of scholars were known Democrats. In 2015 and 2016 combined, 40 of the 112 scholars, or 35 percent, had ties to Democratic politicians or liberal groups. Between 2015 and 2019, only 10 scholarship winners combined had ties to Republicans or conservatism while 107 winners had direct connections to Democrats.

Of this year’s 12 Truman scholars whose political predilections are unknown, four are students at military academies. Another four are deeply involved in medical research (malaria, neuroscience) and appear not to be overtly political. One student from George Mason University, Patrick Grady, has interned for independent U.S. Senator Angus King (who caucuses with Democrats), but has also interned for Republican U.S. Senator Susan Collins. Both senators are from Grady’s home state of Maine. 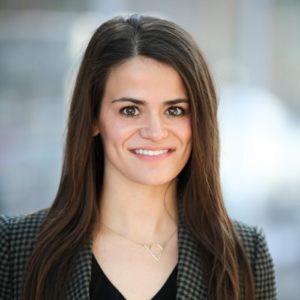 Samantha Thorne (pictured) of the University of Utah and Clara Wicoff of Kansas State University are the only two 2019 scholars who have worked primarily for Republicans.

Thorne, who has interned for both Utah Republican Sen. Orrin Hatch and Gov. Gary Herbert, told The College Fix that she does “lean right,” favoring “principles of limited government, constitutional conservatism, and devolving power to states.”

“I endeavor to not put my political opinions into my academic or professional work and merely present facts or cite others’ opinions,” Thorne said. “At the end of the day I think about what is best for the nation, not the party.” She said she is “passionate about political communications and electoral processes.”

At Kansas State, Wicoff majors in agricultural economics with a secondary major in global food systems leadership and a minor in entomology. She has interned with Republican Kansas State Sen. Karen Tyson and for the Republican-led United States Senate Agriculture Committee.

As for the lopsided representation of left-leaning scholarship recipients, one person with knowledge of the process told The Fix recently that “public service” has now become synonymous with “activism.”

But in an e-mail to The Fix last week, acting Truman Foundation Executive Secretary Tara Yglesias disputed the notion that the awards selection process is biased or flawed.

“Many of our Scholars are interested in issues – such as education, the environment or healthcare – that I would not label as solely partisan issues,” Yglesias told The Fix.

Yet The Fix’s analysis accounts for students who are interested in those issues on a nonpartisan basis; for instance, of the 12 categorized as “unknown” in its 2019 review, a number are deeply involved in medical research and expanding access to better health care.

A Truman scholar is moved into an ideological category when they publicly advocate a liberal position on health care, such as a universal, government-run system. Even some students who advocate bipartisan environmental policies such as “sustainability” are considered “unknown” until they cross over into more liberal causes like “climate justice.”

Further, this doesn’t account for the more than 10-to-1 disparity in award winners who are avowed Democrats versus self-described Republicans.

Both Yglesias and others critical of the selection process concede that since individual universities are in charge of forwarding nominations to the Truman Foundation, their board is limited in who they may select as winners. If professors who select nominees are sending progressive candidates to the Truman board, even if the board members are nonpartisan, the selections will by default lean heavily to the left.

This is granted credence by Thorne’s own application experience, where she says she did not witness any bias throughout the entire process.

“My opinions were taken very seriously,” she said.

But she also noted her process was done through the University of Utah’s Hinckley Institute of Politics, which she called nonpartisan in “every sense of the word.”

“I have never seen any staff member push a political view on a student,” Thorne said. “Nor did I sense bias in the final Truman interview. I viewed my political history as an asset throughout the whole process since it helped me stand out from other candidates.”

Thorne’s experience supports the idea that if universities forwarded more conservative students to the Truman board, there may be less of a progressive monopoly on the scholarships awarded.

While the Truman scholarships lack ideological diversity, the scholars are diverse on racial and gender lines. Of the 62 winners this year, more than half – 32 – are students of color. Additionally, 39 of the scholars – or 63 percent – are female. Only 10 of the recipients – or 16 percent – are white males.

Since the creation of the Truman Scholars program, 3,000 students have received the award. The scholarship was created by an act of Congress in 1975 and the first awards were granted in 1977.