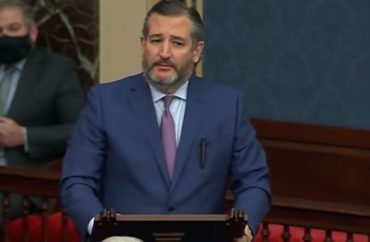 Student members of Princeton University’s prestigious political society have voted to revoke an honor given to Senator Ted Cruz.

The American Whig-Cliosophic Society voted 37-32 in favor of the motion to revoke the Republican politician’s James Madison Award for Distinguished Public Service on March 4. Now the final decision rests with its board of trustees.

The vote was preceded by a petition organized by a member of the American Whig-Cliosophic Society to rescind the honor, as well as calls for President Christopher Eisgruber to consider rescinding Cruz’s degree from Princeton.

Cruz’s “decision to support lies of election fraud and his role in the invasion of one of the three pillars of the American government is at severe odds with his position as a senator in our democracy,” the petition states.

Neither Cruz’s offices or representatives of Whig-Clio responded to multiple phone and email requests for comment from The College Fix.

The American Whig-Cliosophic Society is the oldest collegiate political society in America, founded at Princeton in 1765 by students such as Aaron Burr and James Madison. Its ranks have included President Woodrow Wilson and Supreme Court Justice Samuel Alito.

Whig-Clio’s highest honor, the James Madison Award for Distinguished Public Service, has been awarded to those who have “taken up the arduous but righteous cause of dedicating their life to the betterment of society.”

In the past, the award has gone to many notable public figures, including Barry Goldwater, Jesse Jackson, Bill Clinton, Antonin Scalia, and Jimmy Carter. Cruz was awarded the honor in 2016.

In the wake of the January 6 Capitol riots, a petition surfaced urging that Cruz be stripped of the award.

The controversy highlights a growing political tension among the political society.

Even prior to the vote on Cruz, Princeton student Adam Hoffman, who chaired the Cliosophic Society, penned a piece in January for National Review detailing his struggle to “bring conservative speakers and voices to the heart of Princeton’s political scene,” claiming that his job has been “shut down by an intolerant Left.”

Hoffman detailed how Whig-Clio denied requests to bring conservative speakers such as Princeton alumnus George Will and circuit court Judge Neomi Rao while allowing left-leaning speakers such as journalist Jamelle Bouie: “the speakers’ fates seemed sealed before we even began consideration.”

Clio Party Chair Matthew Wilson, who contributes to The College Fix, expressed concern as to the reputation of the society after the vote to revoke the award from Cruz.

“The Assembly’s decision to recommend revoking Senator Ted Cruz’s JMA was embarrassing, and Whig-Clio members who supported the revocation did real damage to the integrity of the Society,” Wilson said in an interview with the Daily Princetonian.

He said the results “amount to nothing more than a conceited attempt by left-wing students to inflate their own egos and cancel Princeton’s most prominent conservative alumnus.”

Canceling conservative speakers dates back to at least 2018 for the society.

“The society faced the Amy Wax controversy in 2018. Wax, a law professor at the University of Pennsylvania, was disinvited to speak less than 20 hours before her free speech event was scheduled,” the Princeton Tory reported.