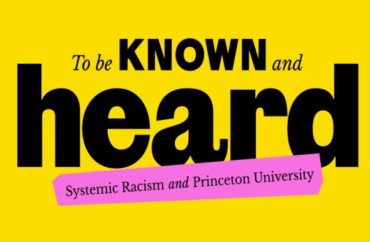 Princeton University required all incoming freshmen to watch an hour-long video that likened personal denials of racism to segregation, urged the students and university to do more for “undocumented immigrants,” and warned that those who protested the 2020 presidential election bear some resemblance to Confederates.

The purpose of the video was to grapple with “systemic racism and Princeton University,” according to the video’s subtitle, but it’s been criticized as painting a “one-sided and negative picture of Princeton’s history” as well as “indoctrination.”

The video was organized as a commentary on a “virtual gallery” detailing racism at the Ivy League university with chapters on “Activism and Intersectionality”; “Race and Free Speech”; “Anti-Racism Resources and Actions”; and “Visions for a More Just World.”

The meat of the video began when one of the co-presenters asked four professorial panelists to react to an item in the gallery that caught their attention.

Historian Beth Lew-Williams, who is Asian, pointed to an item that was an instance of obvious racial segregation from the gallery. Its description read:

In the 1930s, Bruce Wright was admitted to Princeton [on a scholarship], but administrators rescinded the offer when they realized he was Black. Dean of Admission Radcliffe Heermance told him, “If you’re trying to come here, you’re going someplace where you’re not wanted.” Wright was later named an honorary member of the Class of 2001.

Lew-Williams read from Heermance’s letter, which asserted that “Princeton University does not discriminate against any race, color, or creed,” before the dean proceeded to do just that.

The dean claimed to “speak as one who has always been particularly interested in the colored race, because I have had very pleasant relations with your race, both in civilian life and in the army.”

Lew-Williams compared those honeyed words used to justify excluding Wright from the university to present-day people who have not kept people out of universities asserting their own lack of prejudice.

“It sounds a lot like, ‘I’m not racist, because I have black friends,’” she said.

Classicist Dan-el Padilla Peralta, described on his staff biography as “Dominican by birth and New Yorker by upbringing,” both praised Princeton’s recent efforts on behalf of “documented immigrants” and faulted its lack of effort for “undocumented immigrants.”

“The university … has made a concerted effort in recent years to advocate on the behalf of immigrants, especially documented immigrants,” he said.

He pointed out that the school made an effort at the Supreme Court to keep the Trump Administration from ending Deferred Action for Child Arrivals, or DACA.

“As much as the university has been supportive in recent years of documented students, its support of undocumented students and undocumented applicants, at both the undergraduate and graduate level, who do not have the benefits and the protections that come with DACA, leaves much to be desired,” he said.

Peralta urged “all of you who are interested in advocacy for immigrant rights at Princeton to reflect on the gallery and what it says about the university’s present as well as prospective future commitments in support of immigrant rights.”

Tera Hunter, a professor of African-American studies, compared Princeton’s debate on how to honor its Civil War dead, which was fractious but eventually resulted in all soldiers who fought on both sides being listed together on a plaque, to the recent civil unrest surrounding the certification of the 2020 presidential election.

“The reason I think this is significant,” Hunter said, “is also because we are also facing a similar crossroads right now in the nation. We just witnessed an unprecedented incident of domestic terrorism, an effort to overthrow Congress, which we would call a coup attempt if it happened in any other country in the world.”

She said that there were “those who aided and abetted the coup who are now suddenly interested in national unity” and asserted that “there’s a kind of disingenuousness to create reconciliation without doing the work of holding people accountable before we rush to forgive and forget.”

She talked about the “destruction of Reconstruction” and said “we must ask, ‘At whose expense are we rushing towards reconciliation?’”

That rush was shown to be very bad in the past and, by historical analogy, dangerous in the present. She posed the questions:

How did the failure to adequately come to terms with slavery and the Civil War facilitate the rise of more anti-black racism across the country for the next century and beyond, and how does that failure continue to haunt our nation today?

Those are “some of the lessons” Hunter sees in Princeton’s Civil War memorial controversies, she said.

How it’s playing at Princeton

The reactions at Princeton to the mandatory orientation video have been mixed.

“Several of my [residents] shared … that Princeton was the most diverse place they’ve ever been … They were glad for the video, they felt like they needed to learn more about how to be respectful of different identities,” Residential College Adviser Patrice McGivney told the Daily Princetonian.

“The gallery and video must have left impressionable new students thinking that Princeton is a hateful and evil place,” the wrote in RealClearPolitics.

“The gallery also contains a vicious attack on one Princeton professor by others for a controversial statement in a July 2020 article that the university later found to be officially protected by its free speech rules. This attack sent a clear message that Princeton’s rules protecting free speech must have little meaning since the administration will attack its own professors if they say something out of line with woke ideology,” they added.

John Londregan and Sergiu Klainerman, Princeton professors of politics and mathematics, wrote a column condemning the project in the New York Post in no uncertain terms.

They accused the Princeton Department of Diversity, Equity and Inclusion of taking a “nihilistic view of the enormous progress made in the last 50 years” and speculated:

The only good that may come from this is that, maybe, some members of the Class of 2025 will decide to specialize in history, motivated by the desire to do a better job of exploring and explaining the past, with all its nuances and contradictions, than their university has done.

Then again, maybe not. Residential College Adviser Sydnae Taylor “mentioned that the tone of the gallery, in attempting to present nuanced depictions of racist men, fell short of directly condemning their actions,” the Daily Princetonian reported.

“I’d like to see [the gallery] call it out as clearly wrong, no ifs, ands, or buts,” she said.