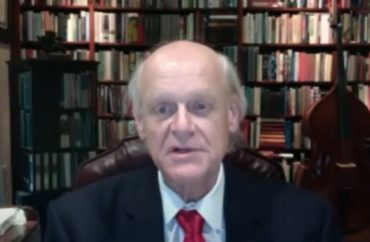 While schools like the University of Wisconsin Madison have considered canceling President Abraham Lincoln, one Princeton professor wants to preserve his legacy and help students learn more about the nation’s 16th president.

The Ivy League university will offer a course called “Abraham Lincoln’s Politics: Concepts, Conflict and Context” this semester taught by Professor Allen Guelzo, a Civil War historian and author. He also serves on the board of the Abraham Lincoln Association.

“We will use Lincoln as a means of understanding how the practical necessities of politics in the American democracy were combined with an appeal to democractic [sic] political culture,” the syllabus said.

“I offer this course because I regard Lincoln as one of the genuinely admirable characters of our political history,” Professor Guelzo (above) told The College Fix via email. He said Lincoln is a rare American who fulfilled “the classical demands of republican statesmanship for persistence, humility, long-term thinking, resilience, persuasiveness and morally-excellent leadership.”

“By our standards, he was myopic on the subject of race,” Guelzo said, when asked about attempts to cancel Lincoln. “But myopic is not the same thing as blind; he always hated slavery and expected it to come to an end; he extended himself at great political risk to promote emancipation,” the Princeton professor said.

“We all see through a glass darkly, and at the end of his life, he was taking steps toward the civil equality which would later be encoded in the 14th and 15th Amendments,” Guelzo said.

He said “Lincoln’s limitations are not unlike the limitations” people suffer from today. He said people can learn humility from recognizing limitations. “These are not bad lessons to be obtained from a course of historical study.”

But the Princeton historian is not sure if a better understanding of Lincoln’s legacy would help his adversaries.

“Whether this will act to restrain the statue topplers is another question. Few of them, whether the San Francisco school-renamers or the removers of the Ball Emancipation Statue in Boston, show even the faintest curiosity in history or the historical reasons for Lincoln as an object of popular respect,” he told The Fix.

The Princeton course will not rely solely on historian’s views of Lincoln — instead, it engages directly with the president’s own writings and speeches, with historical commentary complementing the study of his life and views.

“The most important aspect of the course will be a direct encounter with Lincoln’s own writings, so that by the close of course,” the course description said, “you will have come to a practical and thorough knowledge of Lincoln’s ideas and the cultural environment from which he emerged.”

Every week, according to the syllabus, students will read from Lincoln’s speeches and writings. Weekly topics include “Lincoln and God,” “Lincoln and Emancipation” and “Lincoln and the Law.”

The course also includes classroom discussion and a paper about President Lincoln.

There are several sections of the course open for Princeton students.