Princeton University prevented sophomore Danielle Shapiro from contacting an anti-Israel student activist and reporting on protests because the activist requested a “no-communication order” under the purview of a Title IX protection, Shapiro wrote on September 23 in a Wall Street Journal op-ed.

“You’ve read stories on these pages about campus censorship, hostility toward pro-Israel Jews and the excesses of Title IX regulations regarding sexual misconduct,” Shapiro wrote. “I have one that combines all three—and an attack on press freedom to boot.”

Shapiro had covered on March 1 an anti-Israel protest for the Princeton Tory, an independent student-run outlet. After, she received notice that fellow Princeton student Harshini Abbaraju had felt “distressed” by her and had “requested a no-communication order.”

Abbaraju “was among the organizers of a Feb. 22 protest by the Princeton Committee on Palestine against the Israel Summer Programs Fair hosted by the Center for Jewish Life,” according to Shapiro.

While covering the protest, Shapiro said, she “followed up with an email to Ms. Abbaraju to clarify and confirm quotes I had recorded.” 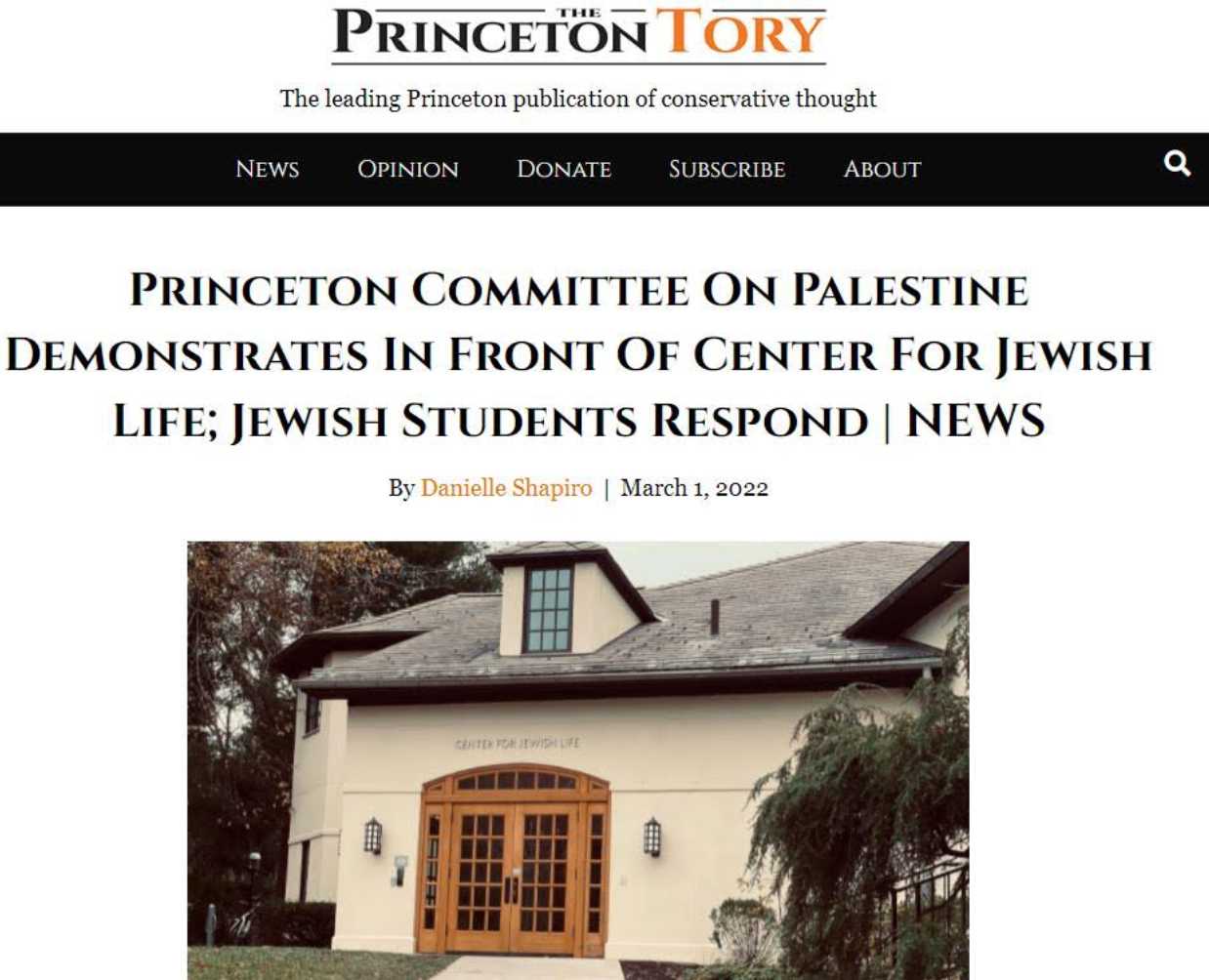 “While she disagreed on some points concerning context, she remained cordial throughout our exchange and never indicated that she felt threatened or wished to terminate our conversation,” according to Shapiro.

However, two days after the article was published, college director of student life Momo Wolapaye sent Shapiro the “no-communication order” requested by Abbaraju.

The letter serving as official notice of the NCO stated “neither you nor Harshini Abbaraju ’22 may have any communication with each other in person or through another party, by telephone, letter, e-mail, or other electronic media, or by any other means, including via social media.”

The letter did not accuse Shapiro of violating university policy, but it threatened “disciplinary consequences” for noncompliance.” Over the phone, Wolapaye told Shapiro that the student had felt “distressed” by Shapiro, and that university can issue such orders on request “for any reason and no reason.”

The letter further directed Shapiro to the “No Communication Orders and No Contact Orders FAQ” section of the “Sexual Misconduct and Title IX” Princeton website, Shapiro wrote.

Campus police and the senior associate dean of undergraduate students also received copies of thee letter, according to Shapiro.

Shapiro wrote that the letter clearly prevented her from doing her due diligence in fact-checking quotes as a reporter — “which is all I’d done to provoke it,” she stated.

“I don’t want you to be in a situation where you send her an email or you see her and ask her a question and she reports that you’ve violated the no-communication order because you’ve communicated with her,” Wolapaye, the college director of student life, told Shapiro.

Wolapaye ignored three follow-up emails, but Shapiro persisted in attempting to get the no contact order lifted, she said. Nearly two months after its issuance, it was revoked on April 28, Shapiro wrote — “less than a month before Ms. Abbaraju’s graduation day.”

“During that time, [Abbaraju] was free to organize protests, but the university restrained my ability to report on them,” Shapiro said.

Shapiro told Joyce Chen Shueh, the senior associate dean of undergraduate students, that she “believed that issuing an NCO under these circumstances violated Princeton’s commitment to the Chicago Principles, which provide that while ‘the University may restrict expression that . . . constitutes a genuine threat or harassment, . . . it is vitally important that these exceptions never be used in a manner that is inconsistent with the University’s commitment to a completely free and open discussion of ideas,'” Shapiro stated.

Additionally, “although the website assures students that NCOs aren’t “punitive,” they are burdensome for the targeted student,” Shapiro wrote. Examples of prohibited contact included “studying in the same section/floor of the library as the other party” and “standing next to the other party in line at a food servery.”

“Imposing these restrictions doesn’t require so much as an accusation of wrongdoing, much less proof,” Shapiro concluded. “Princeton has transformed a shield against harassment into a sword against the press.”